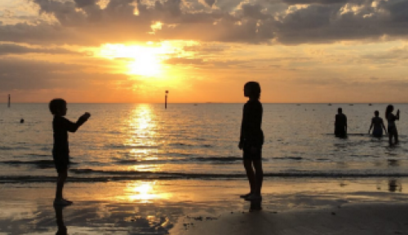 Australia is grappling with a seemingly endless summer, as every state and territory swelters through an unseasonably hot start to autumn.

The country is experiencing warm weather as the mercury climbs above average in most areas, during a month usually reserved for a cool change, the Bureau of Meteorology (BOM) has said.

Only small areas along the southern coast of Western Australia and along the central Queensland coast have recorded below average maximum temperatures so far this month.

“Some of the more significant heatwaves during spring and autumn have occurred when conditions have been dry, and it has been a very dry second half to the monsoon season,” he said.

on Tuesday night, when temperatures hovered at 30 degrees Celsius, only dipping slightly after midnight.

A severe heatwave has been sweeping Victoria for almost a week, and the temperature on Tuesday night smashed the previous record of 26.9C set in 2008.

Hot conditions continued in the north of the state on Wednesday, with temperatures reaching as high as 39C, before an afternoon cool change into the mid 20s.

Sydney has recorded 33 consecutive days above 26C and the forecast shows the warm weather is set to continue for at least another week.

Mr Martin put the warm weather down to a slow-moving high pressure ridge south of Australia, particularly over the south Tasman Sea.

He said the ridge had persistently directed warm air over south-east Australia.

“Those high pressure systems have also prevented cold air coming up from the Southern Ocean, so we’ve had these runs of consecutive warm days,” Mr Martin said.

“Ocean temperatures around the country have also been persistently warmer than usual.”

“Above-average temperatures are likely to continue for much of the country for the week ahead, at least until next Tuesday, March 15,” he said.

After that, the country’s south-west will heat up, with Perth forecast to have temperatures above 35C on Sunday, Monday and Tuesday of next week.

“Forecast rainfall in central and northern parts of the country may cool those areas in the week ahead,” Mr Martin said.