Home > News > Australia: Unhappy with the weather? You...

Australia: Unhappy with the weather? You need “Weather Vent” – the climate complaints line 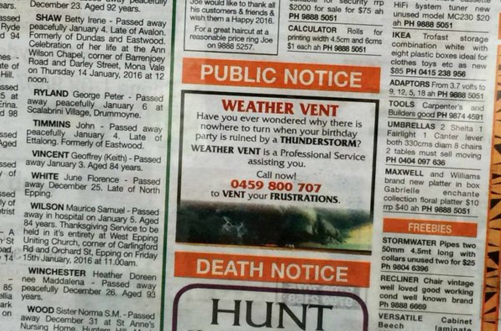 People are annoyed about the weather and they like talking about it.

When Angela Garrick took out classified ads in small newspapers advertising “a professional service” for people to vent their frustrations about the weather, the response was swift.

One man complained about an infestation of cockroaches due to the humidity, and another who had just flown from Sydney to Melbourne was annoyed that it was colder than he anticipated.

“I get to Tullamarine Airport wearing nothing but my board shorts and my T-shirt and I’m shaking.”

The dozens of voice messages are contained in Garrick’s art installation as part of the SafARI exhibition at the Cross Arts Gallery in Potts Point.

“They’re all amazing. My favourite one would probably be a respondent that’s a younger man who basically just sounded very distraught that his bike had melted due to the heat. He was very upset about that,” Garrick said.

In his one minute, 25 second-long lament the man also complained about wasps, the sun and cooking.

“I got tar all over me because it was so hot the bike handles melted on this bike,” he drawls.

Garrick loves to talk about the weather and was not surprised other people did too.

“I feel like in this day and age we’re always having to perfect our lives and make them as perfect as possible but there’s just some factors that we just can’t control and [the weather] is one of them,” she said.

“I would say that the younger people seem to be more performative whereas the older respondents are more, definitely more succinct but maybe angrier.”

Garrick plans to keep the hotline open indefinitely as an long-term archive of people’s thoughts about the weather.

Hi there.  Have we just reached Peak Stupidity when it comes to A/ Weather, B/ Social meda.