Australia: Tropical low set to strengthen into another cyclone 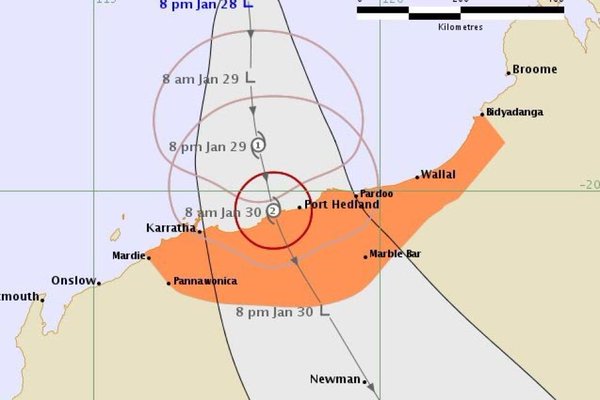 A tropical low that has developed off Western Australia’s north west coast is expected to strengthen into a category two cyclone just before it crosses the coast on Saturday.

A yellow alert has been issued for coastal communities between Pardoo and Whim Creek, including Port Hedland and South Hedland, with people urged to get ready to shelter.

A blue alert has been issued for communities from Bidyadanga to Pardoo, and from Whim Creek to Mardie, with residents urged to prepare for cyclonic weather and organise emergency supplies, including water.

Our first tropical low of the season is winding up off the coast of NW Australia, it may become a cyclone. Helen W pic.twitter.com/iXpEdi7qQ4

The low is expected to strengthen into a category one cyclone on Friday afternoon before making landfall on Saturday between Pardoo and Karratha, including near Port Hedland.

“Currently we do have a watch between Bidyadanga and Mardie which includes Karratha and Port Hedland,” Ms Bond said.

“That means that gales could be expected within the next 24 hours.

“We could see the tropical cyclone reach category two which means you could expect gusts up to 150 kilometres an hour as the centre crosses the coast.

“We’re expecting it to cross near Port Hedland, but it could pass anywhere between Karratha and Pardoo.

“We could see the category reach number two around Saturday morning just before it reaches landfall.”

A flood watch has been issued for the Pilbara, with heavy rainfall likely from Friday.

Isolated falls of up to 100 millimetres are forecast for the region and flooding is expected in the De Grey River catchment.

If the system develops into a cyclone, it will be called Stan, the BoM said, adding that another cyclone may also develop next week.

“It looks like the model’s indicating there might be a further system late in the first week of February developing up around the Kimberley as well,” Mr Hayes said.

The Pilbara Ports Authority (PPA) said it had begun evacuating the inner and outer anchorages at the port of Port Hedland.

A spokeswoman said the Port of Dampier was expected to begin evacuating vessels from its outer anchorage late on Thursday.

The Port of Ashburton remains open, however, PPA said it would continue to monitor weather conditions.

Meanwhile, residents have taken to social media to report low supplies of bottled water and other essentials in supermarkets.

“Someone said the magic C word and POOOOF its all gone,” wrote Port Hedland resident Talia Bradley on Facebook, above a photo showing just a few bottles of water remaining on a shelf in a Port Hedland store.