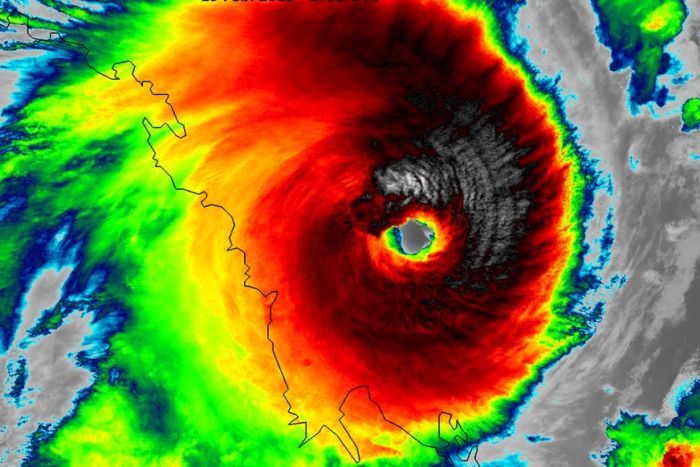 Cyclone Marcia has been downgraded to a tropical low after cutting a path of destruction along central Queensland.

But heavy rain continues to fall across several regions and authorities are evacuating residents from the small town of Jambin, south of Rockhampton, as the Callide River floods.

The automatic gates at Callide Dam were triggered overnight, releasing water into the river, which has reached nine metres and is continuing to rise.

Several properties in the region have been inundated.

Sunwater says the dam is not built for flood mitigation and the gates are designed to open when the dam is full.

About 50 families have been sheltering at the Jambin State School.

Authorities said about 45 people were being airlifted from Jambin to the Biloela Civic Centre.

Some residents expressed frustration, saying water should have been released from the dam sooner.

Banana Shire Mayor Ron Carige said plans were in place to do that but cyclonic conditions made it unsafe.

“They were going to release water in a stage set up last night, even, but when the cyclone hit they couldn’t get out to operate that manually so they had to rely on the automatic system,” he said.

North of Jambin, authorities are also considering the air evacuation of about 50 people from the town of Goovigen.

Police are advising residents in the region who remain in their homes to move to higher ground.

In south-east Queensland, the Bureau of Meteorology (BoM) said a very dangerous severe thunderstorm with destructive winds was detected near the area southwest of Eumundi, moving to the south-west.

Heavy rain was continuing to fall on the Sunshine Coast this morning.

The Mary River is rising in Gympie where the Kidd Bridge has been closed to traffic.

The storm is expected to dump another 100 millimetres of rain in the region this morning.

Gympie authorities say if the Mary River continues to rise, the Bruce Highway may be cut south of Gympie by Saturday night or Sunday morning.

Council disaster management coordinator Dimitri Scordalides said there could be flooding in the city’s CBD.

“It’s raining fairly hard at the moment but the issue now is that we’ll start looking towards the rising of the Mary River,” he said.

“It’s expected to be about 14.6 metres later tonight and early tomorrow and we’ll be making preparations for that.”

Overnight, hundreds of families slept in cyclone shelters and will start the clean-up effort today, while residents in the state’s south-east are on alert for heavy rainfall as the storm system heads south.

Yeppoon and Rockhampton copped the worst of the cyclone’s effects.

There were more than 3,000 calls for help in the past 24 hours, mostly in Rockhampton and Yeppoon.

But Gladstone Mayor Gail Sellers said it appeared on initial indications that their city had suffered much less damage than expected.

“Our roads have survived reasonably well. We have the road to the west to Biloela closed. Some areas still have no electricity,” she said.

“Awoonga Dam has overtopped and the road below that, Pike Crossing. Gladstone’s been very lucky I have to say and we hope to be back to normal next week.

Premier Annastacia Palaszczuk asked the Defence Force to assist in cleaning up debris in worst-hit areas, with two Air Force planes to be deployed to help assess the extent of the damage.

The AP-3C Orion and maritime patrol aircraft and a KA-350 King Air will arrive in the region today and use high resolution imagery to analyse damage to the area.

Ergon Energy will have about 500 staff on the ground in the Capricornia region working to restore power to more than 57,000 customers who have been impacted.

“In the case of those kind of customers who think they need special assistance, they probably need to contact their local disaster management group, and see what options they may have,” he said.