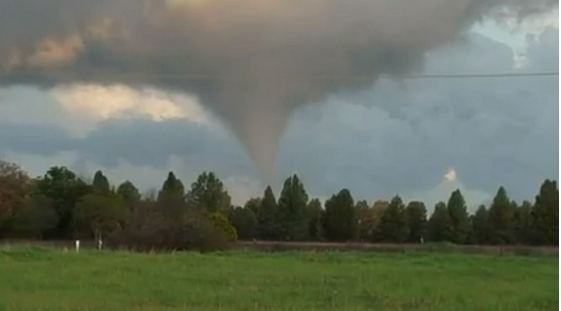 The mini tornado hit Dubbo in western NSW about 5:00pm on Monday, causing damage to some homes and property.

“It looked very ominous, and I pulled over,” he said.

“I had the kids in the car so I stayed at quite a safe distance.

“What we saw develop was basically a mini tornado and we saw large sheets of iron and building material and branches of trees and get sucked back into the air up into the storm cell.”

Footage on social media showed cars stopped in the middle of CBD streets inundated with water.

The Bureau of Meteorology warned that an east coast low could bring 200-300mm of rain to the Illawarra and South Coast with the potential for flash flooding.

“Particularly the areas of concern are the Illawarra district and northern parts of the South Coast,” weather bureau duty forecaster Rob Taggart said.

“With that low pressure system we’re expecting heavy rain to develop toward the end of the day and into tomorrow and there’s also the chance of flash flooding and riverine flooding in certain catchments.”

Areas that may be at risk of flooding include Wollongong, Kiama, Nowra, Jervis Bay, and Ulladulla.

Authorities have urged the public not to enter flood waters for any reason.