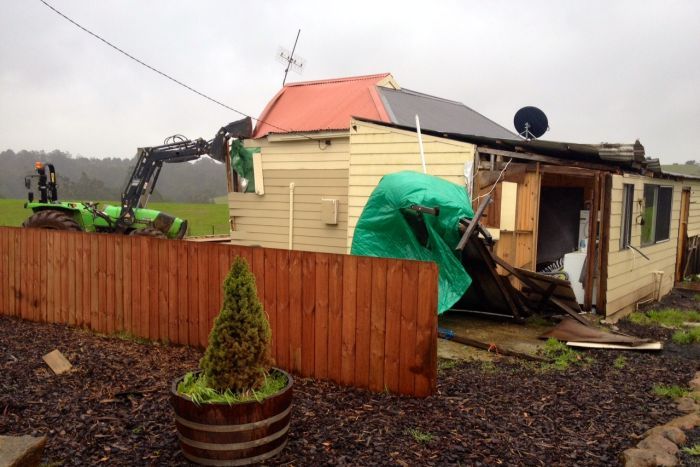 More trees have been brought down on houses across Tasmania as wild weather continues to lash the state.

The weather bureau has warned rough conditions seen in Tasmania this week will continue today.

It will be the fourth day of wild weather that has seen major electricity cuts and extensive damage to homes and property.

In the past 24 hours there was more heavy rain and strong winds, which was expected to continue in the north.

The north could also be hit by more flooding.

A man escaped injury when a tree came down on a house at Blessington last night.

The State Emergency Service (SES) is working to clear another tree which has fallen onto a house in Brisbane Street, Launceston.

Trees have blocked several roads including McKellar Street in South Launceston, New Road in Franklin and the Lyell Highway near Derwent Bridge.

Power lines have been downed at Lilydale Road in the north, Newstead.

Across the north about 3,000 properties are without power.

A farmer in the state’s north-west is using a tractor to hold up the roof of his battered house.

Sean Dicker was home alone with his dog at 6am when strong winds blew the roof off his home at East Ridgley.

The lounge room windows were also blown in and the partially renovated cottage has been flooded.

In the south, weather conditions were expected to ease this morning before picking up again this afternoon.

The weather bureau’s Simon McCulloch said there was more bad weather to come.

“The rainfall rates are going to be ticking over, which could cause some flooding issues,” he said.

“The winds have been pretty strong consistently for two or three days now, certainly winds gusts in excess of 100 kilometres an hour look set to continue.”

The bureau estimated the rough conditions could remain for another two days.

The SES distributed sandbags to some Launceston suburbs yesterday and urged people to prepare their homes for more severe weather.

The damage bill is already in the hundreds of thousands of dollars.

Property owners were being urged to contact their insurers as soon as possible.

After three days of damaging weather across the state, the cost of the clean-up is already high.

The figure is expected to rise once the full extent of the damage is clear.