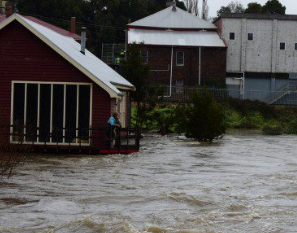 The search for two men swept away in floodwaters earlier this week has become a recovery mission.

The two searches are being helped by falling water levels, which are also allowing residents across Tasmania to return home.

Police divers will continue searching the Ouse River for Mr Foster who went missing in floodwaters on Monday.

Authorities suspect a surge of water swept across farmland and dragged him into the river while he was checking sheep.

A land and air search of the area is expected to be scaled back soon.

Police have recovered what they believe is his hat and are waiting on DNA confirmation but have conceded the chances of finding Mr Foster alive are slim.

Sixty residents from the township of Lorinna in Tasmania’s north are stranded as waters begin to subside in other parts of the state.

Since Sunday, three regions of the state have been hit by record-breaking rain and eight rivers are still in flood.

Meanwhile, the search resumed at first light for two men who were swept away by floodwaters in the north and south of the state earlier this week. The floods at Latrobe also claimed the life of a 75-year-old woman.

Mayor of Kentish Council Don Thwaites said dozens of bridges were gone and the road into Lorinna was badly damaged.

“We’ve been in touch with the army to try and get a Unimog vehicle in and out but they won’t come unless lives are in danger,” he said.

“We’re on our own there [and] we’re hopeful we’ll be able to get the river road repaired by the weekend.”

As the flood clean-up begins in Launceston, where waters are subsiding, there are reports some people have caught gastroenteritis from dirty floodwaters.

State Emergency Service director Nick Wilson said there had been an outbreak among people clearing debris in the worst-hit town of Latrobe.

“We suspect that that’s based on water ingested into themselves, through their clothes and on their hands,” he said.