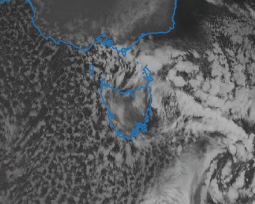 The Huon River in southern Tasmania has risen higher than predicted, posing the greatest flood risk in 20 years.

The council and SES began sandbagging the area last night after heavy rainfall and snow in the area over the past few days.

They also conducted doorknocks to warn residents of potential flooding.

Authorities expected the Huon to peak at about 4:00am but it is still rising.

Bureau of Meteorology forecaster Alex Melitsis said the river was expected to peak later this morning at between 4.2 metres and 4.4 metres Ã¢?? the worst flooding in the area for 20 years.

Glen Huon Road at Huonville, south of Hobart, is closed and a large volume of water has spilled into Main Street and over the Huon Highway on the northern side of the bridge.

“We do have some water inundation in some businesses down here,” he said.

“The SES have also doorknocked local residents and we’ve had two residents which have been advised to be removed from their houses.”

MAJOR FLOODING is now expected along the Huon River around Huonville this morning https://t.co/S46M6a3s2A pic.twitter.com/CiTic2LtcE

Local realtor Ken Studley told 936 ABC Hobart said he had been up since 4:00am and some shops had been inundated.

“We’re one of the luckier shops,” he said.

“Beside us and across the road at the Huon Arcade the shops are all inundated there.

“The water is all through Salamanca Fresh, Bennett’s Petroleum that have just have a lot of brand new works going on Ã¢?? tanks, exposed pipes. God knows what the damage bill will be like there.

“From the Huonville bridge from about 80 to 100 metres, water [is] skimming across the road.

“All the business owners are standing around looking in disbelief and wondering what’s happening next.”