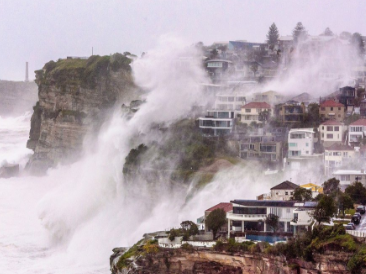 Residents of storm-struck Collaroy remain on edge, bracing to be hit by another monster high tide as they watch their homes slowly crumble into the sea.

After bearing the brunt of the weekend’s fatal storm, the coastal Sydney suburb was flogged by another king tide last night.

University of NSW coastal researcher Mitchell Harley was on the beach at Collaroy last night and said six homes were “cracking up right now” in “grave conditions”.

More residents were forced to flee their homes with a further 12 building and apartments evacuated overnight before the tide hit between 9pm and 12am.

Though the evacuated coast-dwellers are unable to return to their homes today, residents will be forced to watch from afar as a fresh high tide, due about 10am, does its damage.

Collaroy beach, which only last week was recognised for its generous stretch of sand, has been worn away to a churning tide lapping against cliffs with homes on the brink of collapse threatening to fall in.

As of Monday, the beach had been eroded by about 40 metres, with last night’s tide believed to have destroyed another five metres worth of beach.

This morning’s high tide is expected to be about 1.5m high. It’s significant, but less so than the monster waves that have been striking since Sunday when the first load of residents were forced from their homes, causing balconies and even an intact swimming pool to slip into the sea.

The mop-up continues across NSW after powerful storms smashed the state’s coast. The NSW SES is still working on the more than 10,180 calls for help.

At Narrabeen, another badly affected area on Sydney’s northern beaches, about 700 people were evacuated during the weekend’s wild weather but on Monday evening it was deemed safe for people to return home.

The deadly storm, brought on by a powerful east coast low-pressure system making its way down the coast, has caused at least three deaths. The bodies of three men were retrieved from vehicles stuck in floodwaters across NSW and the ACT.

The wild weather continues to wreak havoc with searches for four missing people under way morning.

A search has resumed for a swimmer at Bondi while, in Tasmania, two elderly people are missing, feared dead.

Emergency services have been left “absolutely frustrated” by people who enter floodwaters despite repeated, clear warnings to stay away from them, with both police and the SES stressing people are placing their lives at great risk by doing so.

“Please heed our advice, your life could depend on it,” Acting Assistant Commissioner Kyle Stewart said, adding many of the 290 flood rescues across NSW could have been avoided.

The destructive low-pressure system has moved south to Tasmania on Monday and a flood watch has been issued for all Tasmanian river basins.

Authorities on Monday night suspended the search for a man in his 80s, who was swept away by floodwaters from his Ouse property about 8am.

The Spirit of Tasmania ferry service, between Melbourne and Devonport, has been suspended until further notice.

The Bureau of Meteorology says the heavy rains inundating Tasmania will not ease until Tuesday, and wet weather is forecast for the rest of the week.