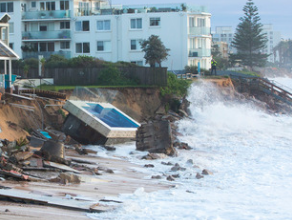 Houses in Sydney’s northern beaches copped a battering, as huge seas swept away the yards of multi-million dollar beachfront homes.

Up to 10-15 metres of waterfront land washed away as residents returned to their homes to assess the damage after being evacuated.

In total seven homes and a unit block were evacuated as eight metre waves battered the coast.

“One of the properties along that strip actually lost an entire in-ground pool which had moved above five metres out to sea,” Inspector Jason Reimer told the ABC.

One resident detailed the destruction to her property.

“Within three hours we had a garden that was just totally destroyed – gone,” a woman told Network Seven as she looked at her home from police tape.

She described how the east coast low combined with a king tide as the water got “closer and closer”.

“I never thought it would be this bad,” she said.

A combination of the tide, the storm and the direction of the wind meant the beachside homes were the target.

A number of sinkholes have now opened up along the coastline threatening homes of more damage and collapse.

Emergency crews are currently on site trying to save the beachfront properties.

One resident told the ABC: “There is no beach at Collaroy,” he said.

The high tides, fanned by the weekend’s monster storm, have eroded huge swathes of Narrabeen and Collaroy beaches, with some properties losing up to five metres of their properties.

Parts of Beach Club Collaroy also collapsed into the sea as the huge swell smashed the Sydney coastline.

One Collaroy resident, Matt Kemp, posted footage of the carnage, which shows a pool washing into the ocean.