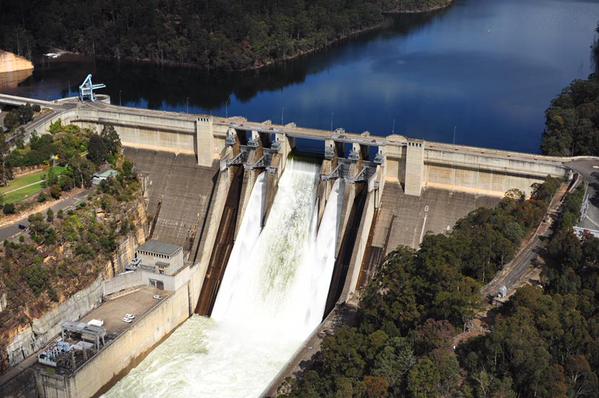 The Sydney Catchment Authority said Warragamba Dam had begun spilling through its central gate this morning.

It is the first time in two years the dam has spilled, according to the weather bureau, though the maximum spill is now expected to be much less than previously forecast.

Up to 160 millimetres of rain fell in the Wollondilly River upstream of the Warragamba Dam in the 48 hours to 9:00am on Wednesday.

Gordon McKay from the Bureau of Meteorology said the river was expected to peak tonight.

“Further downstream the peak will get through Penrith around 6:00pm this evening and we’re expecting the peak to arrive at North Richmond around midnight, and it’ll take another three or so hours to get down to Windsor,” he said.

“At Windsor we expect the river levels to peak below minor flood levels.”

Many residents on the NSW South Coast are still to return home with flood waters in parts of the region yet to recede.

The Shoalhaven region has enjoyed a reprieve from the more than 400 millimetres of rain that has been falling since Monday, with blue skies welcomed by SES unit controller Gerry Sheen.

More than 320 properties have been evacuated since Monday and the emergency services have received more than 900 calls for help.

While around Nowra and Shoalhaven Heads the floodwaters have receded quickly, in Sussex Inlet it is a waiting game.

“There’s empty bottles and drums and all sorts of things coming down,” resident Christopher Sargent said.

Shoalhaven Mayor Joanna Gash said the council was calculating the damage bill and applying for state and federal funding assistance.

In the Shoalhaven region, about 80 homes have been flooded and the heavy downpours have damaged dozens of local roads.

The Environmental Protection Authority has also been monitoring health concerns after the sewage system failed in parts of the region.