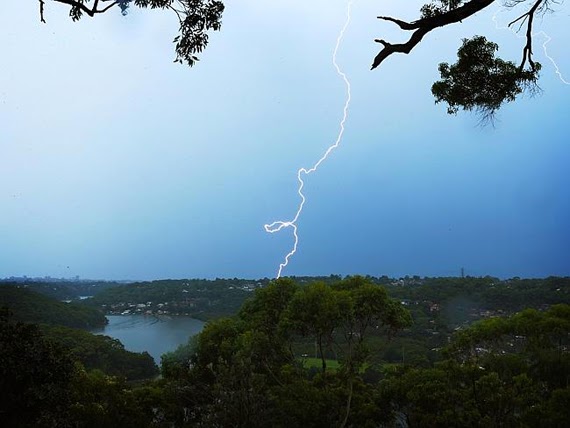 Parts of Sydney have been lashed by a storm on Monday afternoon which resulted in ambulance crews treating several people who were struck by lightning.

Three people were struck and at least 15,000 Sydney properties were left without power after the storm, which included about 3,000 lightning strikes.

NSW Ambulance spokeswoman Jackie Levett said patients in Holsworthy, Wetherill Park and Casula were treated after being hit by lightning.

“Two of these people have been transported to hospital in stable conditions.”

The NSW Rural Fire Service (RFS) said the widespread storms had caused dozens of new bushfires and grassfires, with 107 burning at 7:30pm (AEDT), 71 of which were uncontained.

The RFS said aircraft would be used tomorrow to help the service locate more.

Electricity had been restored to most properties late on Monday night.

They included properties in the Hawkesbury and Blue Mountains regions; at Kenthurst, Hebersham and North St Marys in western Sydney and in the Camden area in the south-west.

The State Emergency Service (SES) said it had received more than 100 calls for assistance from across the state.

The majority came from Sydney’s west, with callers reporting damage to roofs and fallen trees.

The Bureau of Meteorology (BoM) had issued a severe thunderstorm warning, including for damaging winds, for the areas around Orange, Parkes and Condobolin, but it was cancelled at 12:52am (AEDT).

The bureau said a 98kph wind gust had been recorded at Swan Hill just after 2:00pm, and a 93kph gust was recorded at Tamworth at 6:17pm.

A storm earlier hit an area around Penrith in Sydney’s west.

Senior meteorologist Peter Zmijewski said that by 4:00pm the storm had dumped 16mm of rain just south of Penrith, with about 10mm recorded in other parts of western Sydney.

Talkback callers told 702 ABC Sydney that the storm was intense and fast-moving.

One caller, Brian, said he had just driven through St Marys and Penrith on the M4 Motorway.

“The lightning is literally licking the edge of the motorway,” he said.

“It was amazing to watch but a little bit terrifying at the same time. It just came in and smashed the M4.”

The village of Silverton, 25km west of Broken Hill, experienced a hail storm this afternoon but resident Bob Watson said it was not serious enough to cause any damage.

He said he measured 8mm of much-needed rain in the sudden 15-minute downpour.

“It wasn’t a whiteout or anything, nowhere near that, but there was definitely hail in it,” he said.

“It just started off with big drops and, whoosh, down she came and the winds were really strong and pelting the ground.

“We had some hail, I got no damage here.

“I haven’t spoken to any of my neighbours yet but anything that wasn’t tied down would’ve moved, I should imagine.”