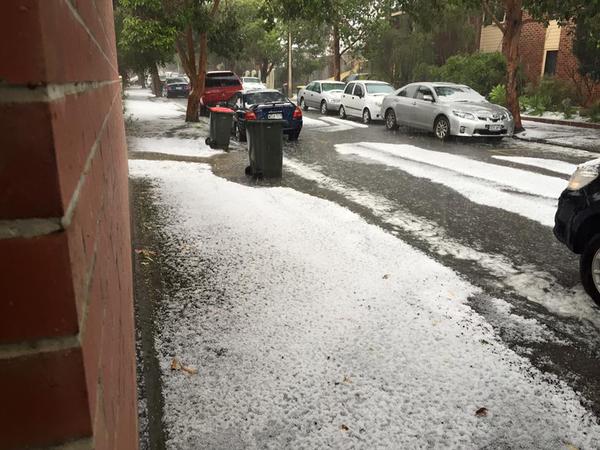 Adelaide’s streets were blanketed in white as hail rained down across the city and Hills, while heavy rain caused flash flooding in some areas.

The State Emergency Service worked into the night to respond to more than 170 callouts to storm affected homes and businesses across Adelaide.

SES spokesman John Carr said calls for assistance were mainly concentrated on Adelaide’s inner eastern suburbs and were due to water damage and flashing flooding.

“So it’s going to be a very, very busy night I think for us as we attempt to clear the backlog of jobs we’ve got.”

Earlier in the afternoon he said the callouts were to both households and commercial businesses.

Trent Gardner was in a Trinity Gardens business that flooded.

“Within about 10 minutes the water was covering the road, it went all the way up to the building, flooded the building, the roof caved in in the building, and all hell broke loose after that,” he said.

Plumber Adam Currie said he had received dozens of calls from residents whose homes have flooded.

“There’s a mess, some of them … just buckets aren’t doing the job … so as I said inch, two inches of water on the carpets, beds, lounges, everything’s just flooded,” he said.

Around 4:30pm the Bureau of Meteorology said the hail activity had passed but rain would continue.

Earlier in the afternoon the Bureau said a low pressure system from the west brought the stormy conditions to the Mid North, Riverland and Adelaide.

“One of them has moved over parts of the north-eastern suburbs and looking at some of the observations it produced around 16 millimetres in Ingle Farm,” he said.

Frequent lightning strikes were also recorded as the cell moved across the city, accompanied by dark, low lying cloud.

The interruption to the day’s business sparked a flood of pictures and videos posted on social media, with thick deposits of hail resembling snow in some parts of the city.