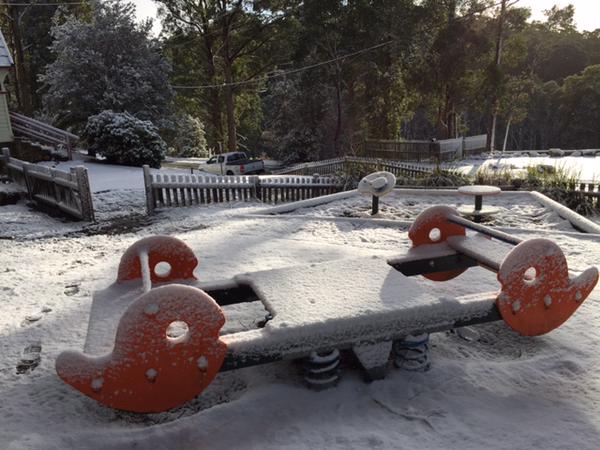 Snow has fallen into the afternoon in many low lying areas of Tasmania after a wintry blast saw snow fall in many parts of the state yesterday morning.

Some Hobart suburbs received a dusting of snow, and a number of schools were closed in the south-east.

“At the moment the snow level is around 200 to 300 metres, and we have showers around the west, south and central areas and only a few light showers getting into the north-east,” she said.

“Those showers are going to continue but the snow level is gradually rising to around 500 metres in the evening.”

A truck jack-knifed on the Huon Highway at Vinces Saddle, south-west of Hobart, closing the road for about an hour to early morning traffic.

Metro Tasmania said its buses could not negotiate the bends on Hobart’s Mt Nelson or Tolmans Hill and advised passengers to check updated service advice for specific routes.

Snow has again been reported in low-lying suburbs around Hobart but not to the extent of three weeks ago when it reached beaches.

The Education Department was forced to close several schools, including Collinsvale, Huonville, Bagdad and at Wilmot as well as high schools at Dover and Oatlands.

Rodney Childs is an electronic technician who travels up Hobart’s Mount Wellington when it snows to service the transmitters, living out of a small mountain top residence.

Mr Childs will have to stay at the top of the mountain because of the heavy snow covering.

“I’m relying on the council boys to dig me out with their tractor and snow plough,” he said.

He said he did not expect to be able to come back down until Wednesday.

“I’ve got my computer on me, so I can edit all my photos and put them into files and that sort of thing,” he said.

“I suppose there’s always something to do.

“I’ve got a freezer stocked full of food; I’m well catered for in that department.”

Forecaster Glen Perrin said the cold blast had originated in Antarctica and more snow was expected.

“Behind that front we’re going to see some very cold air which is coming basically straight from Antarctica, so basically in terms of snow levels looking at around 100 to 200 metres in the south of the state and around 300 to 400 metres in the north,” he said.

“Certainly I think it’s a little bit unusual to see those low events in a row like we’ve seen so I’d say it is, but it’s hard to get an actual figure on that,” he said.