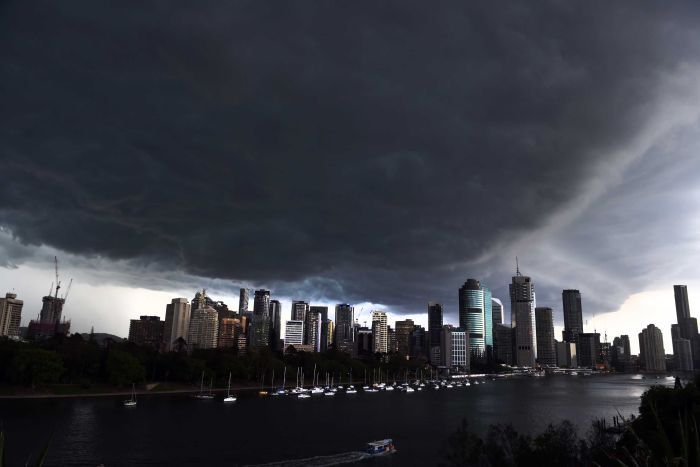 The BoM had warned of “very dangerous” storm cells headed for Brisbane, Logan and the Gold Coast, but the warning was later cancelled.

By 6:00pm (AEST) on Thursday, heavy rain and strong winds had swept through Ipswich and Brisbane but there were no reports of hail or any property damage.

A wind gust of 93kph was recorded at Archerfield airport at 5:45pm.

There were major delays on train lines from Brisbane to Beenleigh and the Gold Coast, along with minor delays on all other Brisbane lines.

By 8:50pm, minor delays persisted on the Beenleigh, Caboolture, Ferny Grove and Gold Coast lines, but other lines had returned to normal.

The line of storms moved rapidly eastwards and by 6:40pm, as they moved across Moreton Bay and Stradbroke islands, the BoM said the situation had eased but would be monitored.

A broader storm warning remained for parts of the Gulf Country, Northern Goldfields and Upper Flinders, Central Highlands and Coalfields and Wide Bay and Burnett.

Earlier, senior forecaster Adam Woods had warned some of the storm cells were intense.

“That system is moving eastward towards the [Brisbane] CBD, it is entering more favourable thunderstorm conditions, so it means the storms may become stronger as they move into the south-east.”