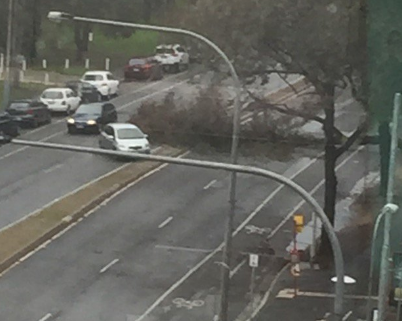 The wild weather that has lashed South Australia this week has finally eased, with State Emergency Service (SES) crews only receiving a handful of calls for help since midnight.

Crews were called to more than 1,755 jobs since Saturday night as damaging winds brought an unprecedented number of trees down across the Mount Lofty Ranges, Fleurieu Peninsula and metropolitan Adelaide.

Yesterday, crews attended 1,080 jobs and this morning the number was down to 25, the SES tweeted.

The Bureau of Meteorology has cancelled a severe weather warning for Murraylands and the upper south-east of the state, with only parts of the lower south-east to be affected by damaging winds early this morning.

About 120,000 properties lost power since the wild weather began on Saturday, with about 1,500 still waiting to be reconnected.

“Eighty per cent of those [calls] were for trees down and that in itself is quite a spectacular number,” he said.

Why is it so cold in #Adelaide? This is where our air has come from! #SAweather #canyousmellpenguins courtesy @NOAA pic.twitter.com/46lByD5BFP

Kangaroo Island ferry operator Sealink is preparing to deal with a backlog of stranded passengers as services resume.

SA Power Networks said it was facing a clean-up bill in the millions of dollars from the storms.

Spokesman Paul Roberts said falling trees had brought down a number of powerlines and poles, mainly in the metropolitan area and Adelaide Hills, causing some of the worst damage to its infrastructure in living memory.

“We’re talking in the millions of dollars in our response to this,” he said.

“It’s a significant impact in terms of the amount of resources we’ve had to use, the equipment we’ve had to replace and the GSL [Guaranteed Service Levels] payments result from this for some customers.

“I think this [event] will be similar to, if not more than, the one we had in the eastern foothills in 2014 which was probably the worst storm damage we’d seen in living memory.

Mr Roberts said customers would not wear the cost.

“This is part of the cost of running and maintaining the business, it’s part of our approved funding,” he said.

“We’ll be able to absorb this, it’s our job really.”