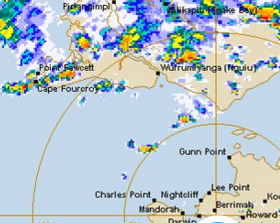 A 90-minute downpour has seen Darwin record more than twice as much rain as usual for the entire month of May.

The storm, which hit the city about 2:00pm, caused a traffic accident, phone problems, and saw heavy rain and lightning strikes.

Wow! What a start to the dry season. The May average rainfall of 21mm recorded in the last hour at #Darwin airport. pic.twitter.com/CZGwyP8NrS

Senior forecaster at the Bureau of Meteorology Laura Boekel said while storms were not uncommon during May, the ferocity of the downpour was unusual.

“The storms came in from the northeast of Darwin and tracked across all morning,” Ms Boekel said.

In just 90 minutes, 47.2mm of rain was recorded at the Darwin Airport rain gauge.

This was more than the 46.2mm that fell during the wet season month of April, and more than double the 21mm that typically falls during May.

Ms Boekel said Darwin was likely to enjoy more rain during the next seven days, although not quite as heavy.

She said May was known to be a “transition month” as the Top End began to experience the dry season.

“It just happened to be a large amount of rain after a particularly dry wet season,” she added.

The downpour in Darwin was confined to the north-western tip of the NT and did not hit areas further south.