Australia: Queensland in for 100mm in 24 hours 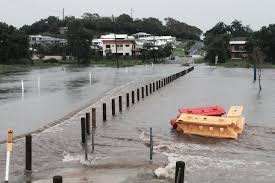 Isolated parts of regional Queensland could experience rainfall totals in excess of 100mm in a 24-hour period, the Bureau of Meteorology (BoM) says.

In its latest weather warning, the BoM said widespread 24-hour rainfall totals of 30-60mm were expected with isolated totals over 100mm possible however that could rise to 120mm with thunderstorms for people in the Capricornia and parts of the Wide Bay and Burnett districts.

The rainfall forecast was down from 150mm plus in an earlier weather warning.

The BoM also cancelled its severe weather for the Central Coast and the Central Highlands and Coalfield however a flood watch for central Queensland and coastal areas between Gladstone and Bundaberg remains in place.

Earlier on Thursday, heavy rainfall led to a dozen road closures in the Mackay region.

Some workplaces in the CBD even closed early to ensure workers could get home.

A number of other locations in the area received 60mm to 90mm in an hour.

Heavy rain began falling on Wednesday as a trough moved into the region.

The biggest falls overnight were in Gladstone, which received more than 100 millimetres of rain.

The rain cut off a number of roads in the region and the two motorists were rescued on the Capricorn Highway near The Willows and the Gregory Highway, north of Springsure.

Authorities said both people were safe and well after their ordeal.

The Capricorn and Gregory highways have been closed, along with the Dawson Highway near Springsure and the Scenic Highway near Yeppoon.

Another flood rescue request north of Bundaberg on Thursday morning proved to be a false alarm.