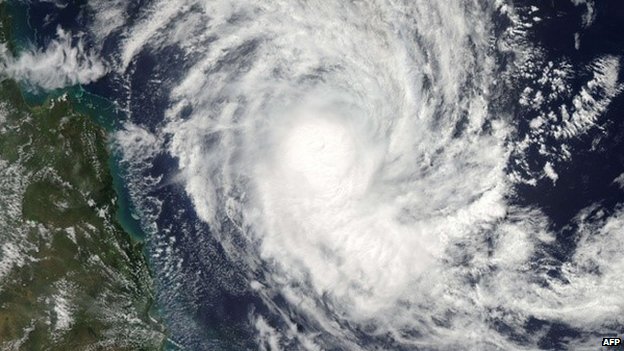 The category three cyclone is returning to far north Queensland, having moved away from the region after forming in the Coral Sea nine days ago.

Nathan is about 335 kilometres east north-east of Cooktown and moving towards the coast, the Bureau of Meteorology (BoM) said.

It is expected to make landfall between Cape Melville and Cape Tribulation tomorrow.

Senior forecaster Michael Knepp (NEP) says it is likely to intensify into a category four cyclone before it hits the coast.

“The good news is those areas around Port Douglas, Cairns, it’s less likely to make landfall there,” he said.

“So in between really Lockhart River and Cape Tribulation is the most likely place for landfall.

“Around Cape Flattery is our bullseye right now but with these sort of systems, they can be unpredictable.”

The storm dumped large amounts of rain, damaged roads and cut off parts of Cape York when it first passed by the far north Queensland coast last week.

A cyclone watch is in place between Coen and Cardwell, extending inland to areas including Kalinga and Laura.

Yes pam was a good miss only because it was a windy cyclone…..we need a wet one and a lot places need a wet one as at waitomo caves the boat in the glow worm cave is getting stuck because the river is to low and arent the rotorua lakes very low?????…..WHY is a cyclone coming?????? i tought its getting to late for cyclones!!!!!!……it takes heaps of rain to end a drought…..most places look semi DRY going by the drive to the caves……i have lived through bola we had 550 mils of rain and yes it did some damage but man did the grass GROW

If Pam had been 150km to the west you wouldn’t talk about duds. We were very lucky.