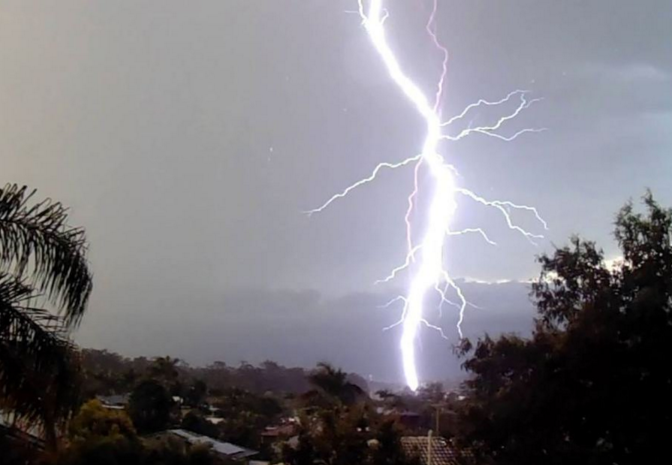 Several houses have lost their roofs at Fernvale, west of Brisbane, as dangerous thunderstorms moved across Queensland’s south-east.

About 50 people called the State Emergency Service (SES) for help in the Fernvale area, after several trees toppled onto roofs and powerlines came down.

Hail slightly smaller than golf balls was reported at Ipswich, Rosewood and further west at Marburg.

The storms, bringing hail and strong winds, moved across Ipswich and impacted northern parts of Brisbane before weakening off the Sunshine Coast.

Jay Lees was working at a Fernvale bakery when the ominous clouds blanketed the township about 4:15pm.

“Within five minutes the sky turned green,” she said.

“Then the heavens opened.

“I’ve never seen such rain and wind force like we had.

“We thought the glass in the front doors of the building were going to blow in.

“The street flooded within minutes.

“It was total chaos, trees, everything just gone.”

The Bureau of Meteorology warned at 9:30pm on Tuesday that more severe thunderstorms were likely to produce damaging winds, heavy rainfall that may lead to flash flooding and large hailstones in the warning area over the next several hours.

The storm on Tuesday afternoon knocked power out to 2,051 properties in Moreton Bay, a further 1,797 in the Somerset council area, and 180 homes were affected across the Sunshine Coast.

A sizzling end to spring

This October has been an absolute scorcher for many parts of western and central Queensland, with many places on track to have their hottest October in recent memory.

Above average days and nights are set to continue for the rest of October in Queensland as a trough continues to filter hot air from the tropical north across western and central parts of the state. In fact, Mitchell and Charleville haven’t recorded a daytime maximum temperature below average so far this month.

For many other places, such as Charleville, Texas and Boulia, this will rank within their top 5 hottest October on record. For these locations, 6 out of their top 10 hottest Octobers have occurred within the last 10 years. This is particularly significant for Boulia, where records go back over 100 years.

Strong El Nino conditions and a positive Indian Ocean Dipole have contributed to this record-breaking October heat. Current climate outlooks have El Nino persisting until at least the end of this year, while the Indian Ocean Dipole looks to rapidly decrease once the monsoon trough becomes more established over the northern tropics.