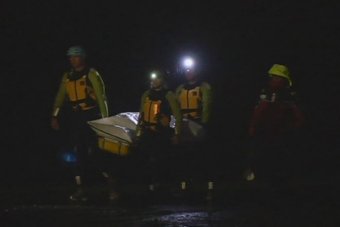 Police have retrieved the body of a woman from floodwaters in New South Wales’ Hunter Valley after her car was washed off a road in a devastating flash flood.

Police divers near Maitland, north-west of Newcastle, found the body of the 86-year-old local woman on Wednesday evening.

There were fears another person had been with her in the car, but police no longer believe that is the case, Inspector Brian Tracey said.

He said the search and recovery operation had been “very protracted” after the car was taken by floodwaters on Cessnock Road about 8:50am.

“We’ve been here since nine o’clock this morning, it’s taken a lot of resources – police and emergency services – and we had to call for the use of sonar gear from the police divers to come and actually locate the vehicle so they could retrieve the body,” he said.

The discovery followed more than 48 hours of relentless rain and gale-force winds that have led to disaster declarations in a dozen council areas between Sydney’s Northern Beaches and the Hunter Valley.

Three people were killed in the town of Dungog, north of Newcastle, on Tuesday morning when floods inundated homes and swept several off their footings.

While the weather has eased, authorities remain concerned about the risk of flooding, with 200 homes in south-west Sydney evacuated on Wednesday afternoon as the nearby Georges River rose.

9pm #Sydneystorm @ausgrid update: Still 200,000 people w/o power. Pockets coming back. Will work through night to deal with emergency jobs

More than 100,000 properties were still without power late on Wednesday night, and the SES had conducted more than 100 flood rescues and dealt with more than 11,000 calls for assistance.

Two drivers died on Wednesday afternoon in a collision on the New England Highway near Singleton, in the Hunter Valley, and two passengers were flown to hospital with serious injuries.

The NSW Government has declared 12 natural disaster areas where special assistance packages would be made available.

Emergency Services Minister David Elliott said a range of assistance packages would be made available for residents and businesses in those areas affected by the weather, and councils would receive support to rebuild damaged infrastructure.

Mr Elliott said the assistance would ensure people had access to food, clothing and accommodation, and could replace belongings such as bedding and furniture.

At 4:00pm on Wednesday, the SES issued an evacuation order for parts of Milperra and Chipping Norton, saying residents who did not immediately leave were putting themselves at risk.

SES Deputy Commissioner Steve Pearce said the order was based on flood modelling for the Georges River from the Bureau of Meteorology.

“Based on their modelling, the river is going to peak at a point where there would be inundation of these 200 properties,” he said.

“We can’t take the chance, seeing what we saw over the last three days, of anyone else being injured or put in danger.