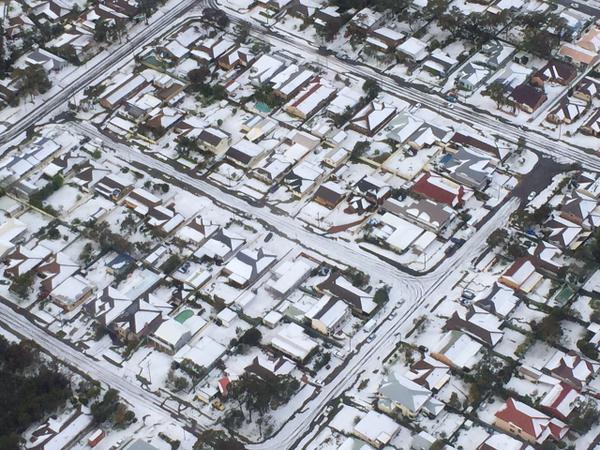 Severe storms on the New South Wales Central Coast have left a thick blanket of hail covering roads and causing power disruptions to hundreds of homes.

The NSW State Emergency Service (SES) on Thursday received more than 100 requests for help across the Central Coast and Hunter regions, including six flood rescues.

A Central Coast resident said there was enough hail to bring out the snow gear.

“I reckon it’s about four inches thick,” he said.

“It’s just madness. In all the years I’ve lived on the Central Coast I’ve never seen anything like it before.

“You could nearly snowboard down [the street].”

Another said it was like going to the snowfields.

“This is something you’d see in Tumut or down in the Snowys,” he said.

“[The SES is] currently still responding to a lot of jobs that have come in from those thunderstorms that passed over the north coast between Grafton and the Central Coast,” she said.

“They were quite severe and we did have some large hail, heavy rain, flash flooding and some damaging winds.”

The SES said the ceiling at a shopping centre at Bateau Bay had partially collapsed. The centre was evacuated, but there were no reports of injury.

“The hail causes problems when you get heavy rain because it blocks the gutters, it blocks the stormwater drains and water can back up very quickly,” he said.

Meanwhile, hail struck a Grafton racetrack during the running of a thoroughbred race which resulted in a racehorse being put down and a jockey in hospital.

All runners finished the event despite hail falling but when the jockeys tried to return to the mounting enclosure, three jockeys and the clerk of the course were thrown from their horses.

Jasen Watkins injured his shoulder and is in Coffs Harbour Hospital while the clerk of the course Alan Watkins suffered facial cuts.

The racehorse Beau Brock, which finished second, took fright and suffered head injuries when he ran through a fence and had to be put down.

“We went onto the track and obviously we could see the storm coming,” steward Drew Smith said.

“It was just raining ever so lightly but within the space of a minute it went to torrential hail so you couldn’t have seen it coming.

“I’ve never seen anything like it, it was relentless.”

Motorists told the ABC the hail caused dangerous conditions on roads with one accident at Tumbi Umbi involving 10 cars.

“There are cars that are in ditches we’ve probably got about 10 centimetres of hail across the road Ã¢?? it looks like a snow field,” one motorist said.

Ausgrid said 1,200 homes and businesses lost power in parts of Bateau Bay and Tumbi Umbi, but services had been restored.