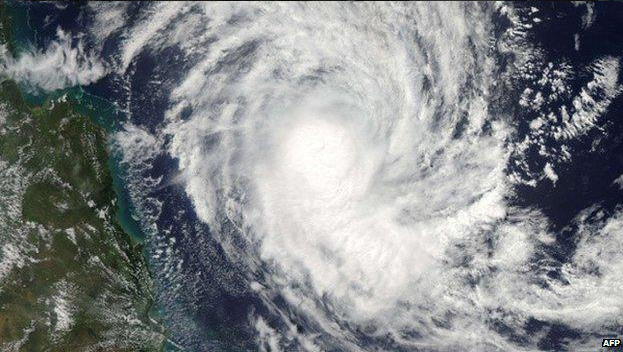 Residents of Goulburn Island will return home on Wednesday after being evacuated ahead of ex-Tropical Cyclone Nathan.

Members of the Northern Territory Police, Fire and Emergency Service have surveyed the community and assessed it as safe to return.

Authorities have asked residents to be back at the Foskey Pavilion and Darwin showgrounds on Tuesday night to ensure they can get home.

The community of Warruwi on Goulburn Island, 300 kilometres east of Darwin, was similarly evacuated in February ahead of Tropical Cyclone Lam.

After that storm authorities who were due to return home.

The storm system, which made landfall as a category one system overnight, has been downgraded to a tropical low as it continues to move south-west across Arnhem Land.

The Bureau of Meteorology (BOM) issued its last advice at 2:01pm CST, saying winds near the centre of the storm system were at 55 kilometres per hour, with gusts up to 85 kph.

The bureau also cancelled its cyclone warning for Goulburn Island to Milikapiti and Gunbalunya to Cape Hotham, which means there are now no cyclone warnings in place.

But damaging wind gusts and heavy rain are still expected over Arnhem Land, and the BOM has issued a separate flood watch.

Rainfall during the next two days could be 100 to 150 millimetres, which could affect road access and isolate communities.

Ten communities across Kakadu National Park in the Northern Territory are being evacuated.

Buses in Jabiru, 250 kilometres east of Darwin, are being used to transport people to the town’s community hall evacuation centre.

Communities on the eastern fringe of the system recorded heavy rain, with 109 millimetres falling at Maningrida and 150mm in Milingimbi in the 24 hours to Tuesday morning.

TC Nathan weakened and crossed the coast between Goulburn Island and Maningrida on the eastern Arnhem Land coast around 6:30am with winds of about 120 kilometres per hour.

On Tuesday morning, the BOM said heavy rain and gusty winds were expected in Darwin within the next 48 hours.

“It’s actually had a pretty terrible night. It’s weakened quite a bit, so now we have analysed it as a category one system,” she said.

Residents between Maningrida and Goulburn Island have been warned to expect a dangerous storm tide as the cyclone spins its way inland.

Nathan is not likely intensify again and is expected to ease rapidly as it moves over land.

The cyclone , with winds of between 100kph and 155kph recorded.

Top End cyclones are notoriously difficult to predict and the BoM’s expected track for Nathan ranged from Katherine, 300 kilometres south of Darwin, to Cape Don and the Tiwi Islands to the north of the NT capital.

Residents of Maningrida and outstations to the east of Goulburn Island who were evacuated to shelters were advised to remain there until local authorities gave the all clear.

Residents west of Goulburn Island to Point Stuart, including the communities of Croker Island, Gunbalanya and Jabiru, were urged to make final preparations to home shelters or to identify which public emergency shelter or strong building to use if advised.