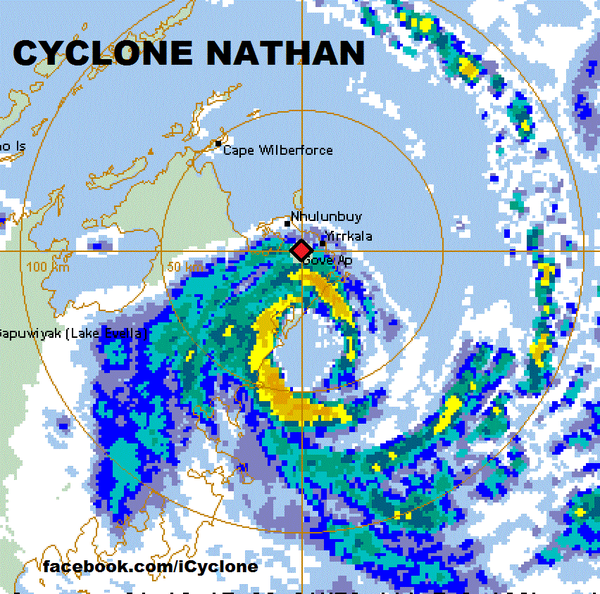 The power of Cyclone Nathan is being unleashed on the far eastern coast of the Northern Territory, with wind gusts of 155kph and torrential rain lashing communities in its path.

The destructive core of category two Nathan made landfall around 8:00am (CST) between Nhulunbuy and Cape Shield, about 650 kilometres east of Darwin.

Nathan is estimated to be 65 kilometres south south-east of Nhulunbuy and 140 kilometres north north-east of Alyangula, moving west north-west at 14 kilometres per hour.

The cyclone will continue crossing north-east Arnhem today and begin to weaken as it moves westward parallel to the Top End north coast during Monday.

The following public shelters are open for residents whose homes are not constructed to building code or who are unsure of their present accommodation:

Galiwinku (Elcho Island) – Marthakal Workshop and the Dhurkkay Building (School). The Shepherdson College is being used to house the residents displaced from the demobilisation of Camp Elcho.

Communities in the cyclone’s path further along the coast of Arnhem Land are on high alert for Nathan’s destructive winds and heavy rains which are expected to bring storm surges, flooding and river rises.

Until Nathan, the closest Nhulunbuy had come to a direct hit from a cyclone was in 2006, when category five Cyclone Monica passed 120km to the north east.

At Galiwinku, on Elcho Island, residents who returned to smashed houses and infrastructure after Cyclone Lam last month have vacated the tent city set up on the community’s football oval and have taken shelter where they can.

Nathan moved into the Gulf of Carpentaria on Saturday morning as a category one system with gusts up to 90 kilometres per hour, defying predictions it would weaken back to tropical low strength as it passed over the land mass of Cape York.

Emergency crews sent to the town left on Friday as the danger passed, with flood levels returning to normal and power being restored in the region.

have years and years of drought but we in little NZ do…..isnt it the 3 rd dry year in a row for many places in NZ or maybe more