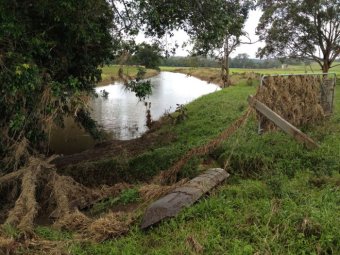 One dairy farmer remains cut off after the Torryburn Bridge was destroyed, while oyster growers say losses are in the millions.

Authorities are still assessing the damage and deciding priorities in terms of the clean up and repair of infrastructure.

A temporary road is under construction in Torryburn to enable milk tankers onto farms.

Until it is ready dairy farmer, Joe Brennan, is still throwing out milk.

“The water went through the dairy,” he said.

“One day we tipped out 4,600 litres, the bridge is gone and the road they’re building, well it’s come to a stop.”

It is estimated the storm destroyed $6 million worth of stock and infrastructure belonging to Port Stevens oyster growers.

Growers were just getting back on their feet after a mystery disease wiped out the area’s million-dollar Pacific Oyster Crop in 2013 and 2014.

“It wasn’t a pretty sight out on the water there,” he said.

“There were oyster trays down all over the place…long lines broken and yachts and boats that broke their moorings and went through our oyster racks.

“One chap had 100 trays lost, with a boat going straight through the lot.

Hamlyn-Harris said the cost has been enormous.

“A lot of the wharves over at Karuah had a boat go through them and they were just demolished.

“I know of at least nine oyster punts that sank and I’ve lost two or three hundred units, each one probably has 10 dozen oysters in it.”

John Drinan is a Singleton farmer who is very concerned about the erosion caused by the fast moving water.

He and other farmers from the area met the flood recovery coordinator, Brigadier Darren Naumann, to ask for help to deal with the permanent loss of top soil.

“It’s certainly the biggest flood that I’ve ever seen here [and] I’m just hoping now that there will be a serious attempt also to actually map the extent of damage,” Mr Drinan said.

He is hoping it will help avoid similar problems occurring next time, as storm events are expected to become more frequent.

Brigadier Naumann said priorities for repairs are still being decided.

In Torryburn, where the bridge has been destroyed, he said land access agreements have to be finalised before the temporary access road can be finished.

“Now what we’ve got to do is start to put some numbers around this and really define what are the major impacts that need to be addressed.”

He is meeting with the Minister for Agriculture Niall Blair today.