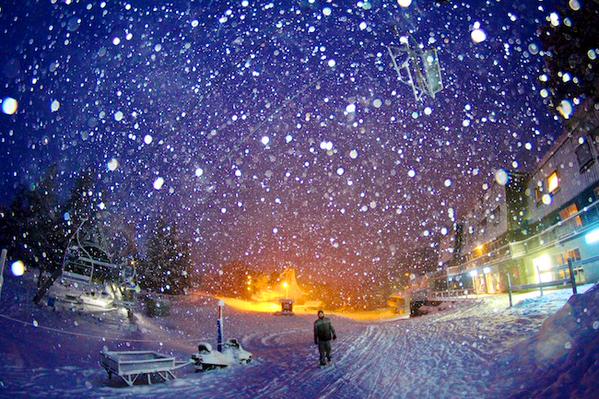 Victorians could expect blizzard conditions, with strong winds, heavy rain and snowfall in the next 24 hours, the Bureau of Meteorology (BoM) warned.

“We had a fair bit [of rain] yesterday, it’s still rainy in the west and we’ll see another band come across the east of the state,” senior forecaster Phil King said.

He said a gale-force wind warning was current for Victoria’s west coast and East Gippsland coast.

“As the low pressure system develops and intensifies east of Gabo Island … we’ll see the winds pick up, heavy rain through Gippsland, further snowfalls in alpine areas and strong to gale force winds,” he said.

Mr King said while the cold snap was Victoria’s chilliest since the start of June it was not unusual for this time of year.

Suit up for the slopes of @PerisherResort! The Snowy Mountains has been gifted a fresh coat of magic. Pic: Perisher pic.twitter.com/AxVkls6ysA

“The system that we’re seeing crossing the state is a severe system, it’s brought cold conditions, snow down to low levels around 800 metres, we had snow at Mt Macedon in the Grampians,” he said.

“We get these kind of systems three or four times a year, it’s a system that brings much-welcome rain and snowfall to Victoria during the winter period.

“They’re important part of our climate and they’re not that unusual but they are severe.”

Snowfall has also been recorded in the western outskirts of Australian Capital Territory this morning, with Corin Forest reporting five centimetres of snow overnight.

Roads around the area in the Tidbinbilla Range have opened, but only for four-wheel drives or cars equipped with snow chains.

A dusting of snow could clearly be seen in the Brindabellas and there is a small chance the snowflakes could fall closer to Canberra’s CBD, with a top of just six degrees expected today.

In Adelaide, gale-force winds brought down trees and powerlines overnight in the wake of yesterday’s cold snap that saw snow fall in parts of the Adelaide Hills and mid north.

The stormy weather also caused damage to roofs and homes, and the State Emergency Service has had about 60 callouts so far this weekend.

BoM’s SA duty forecaster Paul Bierman said while no more snow was likely, conditions would stay cold for the next few days.

“We stay in a south-westerly airstream for the next few days and it’s drawing a lot of air from very far south of the continent,” he said.

“For Adelaide, we’re seeing maximum temperatures of around 13 or 14 degrees Celsius every day for the next seven days.”

Mr Bierman said rainfall totals in the past 24 hours had been in the range of five to 15 millimetres in the Mount Lofty Ranges.

Australia’s most southern state, however, has largely escaped the weather pattern affecting other eastern states and is enjoying relatively mild winter temperatures.

Burnie in north-west Tasmania is heading for a top of 16 degrees, while the capital will reach 13 degrees.

Cold snaps earlier this winter have left higher parts of the island blanketed in snow, where it remains in some places.

While the mercury has plummeted at night leaving frosty mornings, recent days have been chilly and wet in parts but not freezing.