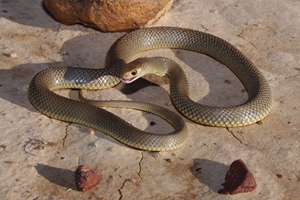 The recent Hunter floods and storms have sent deadly snakes slithering, seeking refuge in places they are not wanted.

Last week’s big downpour, along with rain in recent days, has flushed snakes out of their normal hiding places, forcing them to find dry places to escape rising waters.

Raymond Terrace and Maitland were among the areas hardest hit areas.

“Lots of red bellies and browns, in the yards,” he said.

Warnings over rising reptile numbers after a deadly, pregnant brown snake was discovered under fridge at #Moana. https://t.co/unEaCwHBZq

“A bloke had one that hadn’t had one for 40 years.

“It’d have a lot to do with the floods where they are now.”

Residents are being urged to be on alert.

Mr Bear said he has been working around the clock, responding to calls for help.

“Wherever they’re lurking around, the water pushes them out,” he said.

“They’re not inside houses yet.

“In a yard at Raymond Terrace there was a brown and, yeah, it pushes them out of where they’re hiding.”

arent they surpose to have DROUGHTS !!!!!!!!!….maybe in a la nina which the americans say is coming next year