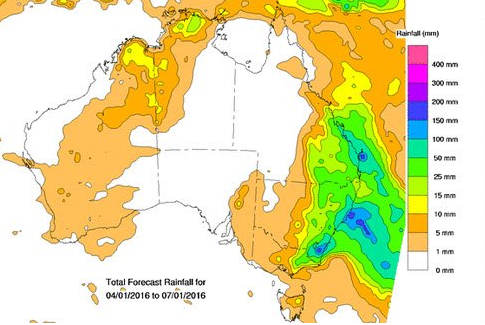 A deluge of heavy rain has caused flash flooding in some parts of the New South Wales Hunter region and a dam to spill, as unseasonal rain continues to hit communities around the state.

A severe weather warning is in place for the mid north coast and Hunter districts, with heavy rain expected to continue through the week.

More than 200 millimetres of rain has fallen in Newcastle with up to 30 millimetres in one hour, leading to flash flooding, with more heavy rain expected going into Wednesday morning.

Authorities rescued two people from a car submerged in floodwaters in the Newcastle suburb of Tighes Hill, while there were reports of a further two cars submerged on University Drive at Callaghan.

NSW State Emergency Service spokesman Phil Campbell said there had been 227 calls for help in the Hunter and more than 150 of those were active.

North of Newcastle, a white alert evacuation warning was issued for properties near the Chichester Dam, upstream of Dungog.

Rain expected for much of #NSW today. If you’re on the road, please slow down and never drive through flood waters. pic.twitter.com/HRsLVrfHLU

“A white alert just means we want to warn people downstream in the local caravan park that water is spilling over the dam [and] that it’s still raining [so] there is a potential for further rises,” Mr Campbell said.

Dungog was declared a natural disaster zone in April last year after it was .

Dungog resident Ed Mobbs said the heavy rainfall had flooded some of the lower lying roads.

“The local field is under water,” Mr Mobbs said.

“The tennis courts, which have just been replaced, are in danger of washing away again.

“A lot of the place that actually got washed away in Dungog before Ã¢?? the houses that went missing and the retirement [apartments], Alison Court that was heavily flooded Ã¢?? all those sorts of areas are in grave danger at the moment.

Mr Mobbs said residents would also be keeping an eye on Chichester Dam.

Flood warnings are in place for the Wollombi Brook at Bulga, the Williams River at Dungog, the Myall River on the mid north coast and Mill Dam Falls in the Hunter.

SES deputy commissioner Greg Newton said there was an “uptick” in the amount of rain falling in the Newcastle area on Tuesday evening.

“There’s obviously been damage to properties through water ingress into roofs as blocked gutters have overflowed,” he said.

“In the course of the day we have had a number of flood rescues with people becoming trapped or isolated in floodwater.”

Mr Newtown said the rain was expected to carry on through Wednesday, possibly easing by the afternoon and into Thursday.

Wyong, The Entrance and Gosford on the Central Coast will also be affected, and further north, Taree on the mid north coast.

Mr Newton said a number of properties had been inundated across the affected areas and there may be more isolated in rural areas.

“Some of our volunteers are currently heading into a group of isolated campers in the area west of Moruya, who have chosen to stay in the area rather than risk and come out through some of the flooded crossings on the roads there,” he said.

“We are also looking at evacuating campers in low-lying camp areas, particularly in the Hawks Nest area and areas around Mile Lakes which are seeing rises there which threaten those camp sites.”

The torrential rain and strong winds forced holidaymakers to abandon campsites across the Hunter and mid north coast regions.

Tracey Moore, manager of the Hawks Nest Beach Holiday Park north of Newcastle, earlier said campers were being forced to move on from the area.

“We’ve tried to relocate them in accommodation that we have available but others have also chosen to leave early,” Ms Moore said.

“There is water everywhere Ã¢?? my husband has been out in the park and it’s even coming through the door in our office. It’s just full on at the moment.”

Crews at Eden on the NSW south coast have rescued children and animals, the SES’s Jacqueline Rose said.

“There was also a rescue today where five children needed to be rescued from a vehicle and they’re all safe now,” she said.

“There was an animal rescue where there was 15 sheep and three cows but they’re all safe.”