Australia: Fires, ferry rescues and evacuations as NSW cleans up after storm 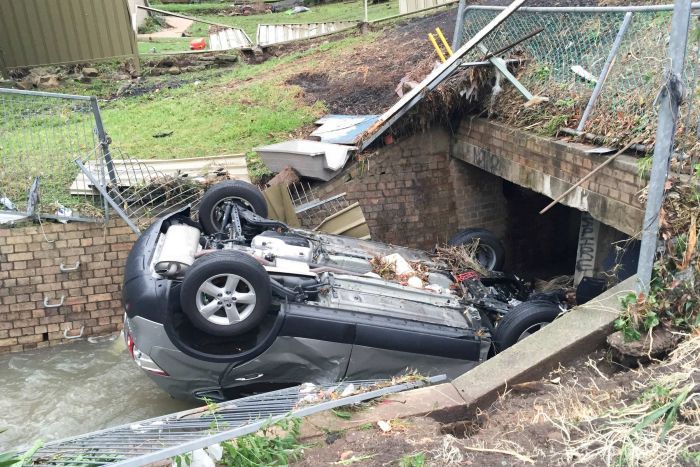 Power was restored to most properties across Sydney and the NSW Central Coast and Hunter regions on Wednesday night, as crews continued to clean up in the wake of a wild storm.

The severe weather diverted flights from Sydney, closed roads, brought down trees and resulted in an unseasonal snow storm in the Blue Mountains.

The SES originally had more than 2,000 calls for help, including people needing to be rescued after driving into floodwaters.

Others needed help with fallen trees and leaking roofs, and the SES warned people to remain cautious around debris and tree branches.

“It’s not very often you see a storm cell that can affect such a large area that quickly,” he said.

Superintendent Paul Johnstone from the NSW fire service said extra crews were called in to help with rescues.

“We had wires down, trees on wires, it’s an extraordinarily busy night for fire crews,” he said.

About 20 firefighters fought another house fire at Guildford, but it was unclear if lightning sparked that blaze.

“This is at the height of this storm and tempest damage that we were responding to,” Superintendent Johnstone said.

“We had four fire engines respond to that fire and that house was well alight as crews arrived.”

At Ulladulla on the South Coast, 171 millimetres of rain had fallen since Tuesday morning and a 161-kilometre-per-hour wind gust was recorded at Wattamolla in the Royal National Park, south of Sydney.

Bureau of Meteorology forecaster Chris Webb said there had been “remarkably heavy rain” in parts of Sydney during the storm.

“The city had 70 millimetres.”

Ausgrid power had been restored to most homes and businesses across its network on Wednesday, despite difficult working conditions in some locations.

“Just when we’re making headway we’re receiving more reports as other wires are coming down after we started to see the wind pick up after lunch,” spokesman Anthony O’Brien said earlier in the day.

In Bundeena, he said, emergency crews located and repaired a fault on the overhead network, switching power back to most homes by about 9pm.

In the Blue Mountains, which was devastated by bushfires this time last year, a snowstorm cut power to three power stations and forced the closure of roads and the train line towards Sydney.

There were reports of up to 20 centimetres of snow falling at Oberon and Lithgow and near Bathurst, affecting road and rail access from the Central West to Sydney.

A dozen passengers had to be evacuated from a Canberra to Sydney train when it was stranded by floodwaters.

SES crews helped nine adults and three children from the train at Bexley North, a Transport for NSW spokesman said.

One passenger said she was petrified.

“I looked out the window, the water was rising rapidly from the bottom level of the train,” she said.

“I went up and pressed the button to speak to the guard because we were wondering, and he could not explain what was going on, and I said ‘we need to get people off this train’.

“The water was rising and it was up to the platform, and it was quite scary.”

The snow and power outages have closed several schools in the Lithgow district, and HSC students were advised only to attend exams if it was safe to do so.

“It’s really crazy, isn’t it? Last year we had fire raging down the hill behind our school, we had police coming to inform us to get the children out as quickly as possible and we turn around and at the same time [this year] we’ve got snow covering the school,” Ms Gillmore said.

“Roads are blocked, buses can’t get in, teachers can’t get into the school, backyards, schoolyards are covered with at least six centimetres of snow.”

A 702 ABC Sydney talkback caller, Mark from Mount Victoria, said he could not got to work.

“[There is] just snow everywhere,” he said.

“I peeled about three or four inches of snow off the windscreen of the car but I can’t get anywhere because all the roads are closed.

“I just rang up work and told them I won’t be in for a bit but I think it’s the same story right across the top of the mountains.”

Caller Vicki had been waiting in traffic on the Great Western Highway for almost three hours.

She said cars could not get through the Blue Mountains from Leura to Lithgow.

“There are trucks just parked everywhere and you can’t get through at all,” she said.

The highway has since reopened between Lithgow and Katoomba but drivers have been warned to expect delays.

The airport remained open through the storm, but 32 planes diverted after crews decided it was too risky to land on schedule.

At the height of the storm, lightning forced airside workers to clear the tarmac.

The Cronulla Ferry Service was also cancelled due to bad weather.

Four operating theatres in Wollongong Hospital have been closed due to flooding caused by Tuesday night’s heavy rain.

The Health Department said water made its way into the theatres and the emergency department while part of the hospital’s roof was removed for construction works.

A spokeswoman said the emergency department was unaffected but some elective surgeries had been rescheduled.

Environment authorities were investigating an oil sheen on Botany Bay near the Caltex Kurnell terminal site.

Both rivers running into the bay flooded in heavy rains overnight and the Environment Protection Authority (EPA) was investigating possible multiple sources of the pollution.