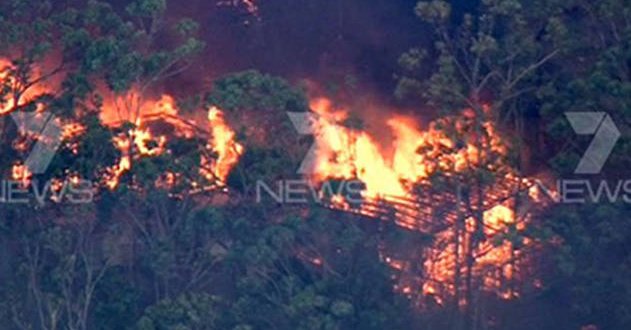 Firefighters battling a raging bushfire on Victoria’s surf coast hope a wind change and rain will stop the blaze reaching the tourist town of Lorne.

More than 300 firefighters have spent the night fighting the 2000-hectare Jamieson Track blaze that has claimed at least 53 homes so far and threatened to advance on Lorne.

Most residents of Lorne, Allenvale, North Lorne and Cumberland River evacuated their homes overnight after the nearby townships of Wye River, Separation Creek, Kennett River and Grey River were evacuated on Friday afternoon.

At around 2am on Saturday the fire was about 10km to the southwest of Lorne, with a southwesterly change starting to push through, Emergency Management Victoria Incident Controller Peter West told AAP.

“At the moment things are looking a lot more promising than they did earlier yesterday afternoon.

“We just have to see how we go with the southwesterly change and how far the fire moves.”

Mr West said some light and patchy rain had started to fall but more was expected across the fire ground through Saturday.

The need to maintain an evacuation warning for Lorne and surrounding communities would be reassessed after daylight, he said.

The main firefront had not gone through Kennet River, but firefighters defending homes there had put out spot fires and no properties had been reported burnt.

Mr West said the weather over the next few days was expected to be favourable for firefighting, with rain and lower temperatures.

The Bureau of Meteorology is predicting a top of 18C at Lorne on Boxing Day and up to 20mm of rainfall.