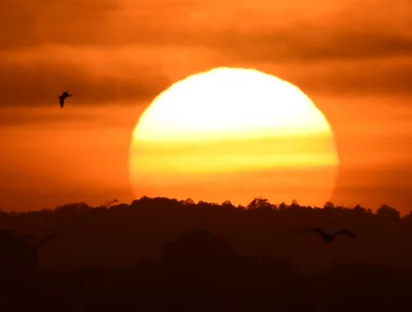 Unseasonably warm weather across Australia, which is set to continue through the coming month, might be putting a spring in people’s step but is a clear sign of dangerous climate change, according climate scientists and meteorologists.

Australia and the rest of the world have been reeling from a string of temperature records being smashed. February caused alarm when it was the most unusually warm month on record by a huge margin. But that record was broken immediately by March.

In Australia March 2016 was the warmest March on record. And this week the Bureau Of Meteorology released its seasonal outlook, showing above average temperatures are set to continue across the country at least throughout May.

According to David Karoly, a climate scientist from the University of Melbourne, climate change increased the chance of March breaking the temperature record in Australia by at least seven times.

“The previous record had about a one in 43-year chance due to natural climate variations alone but now occurs about one year in six in the present climate, that is already affected by human-caused climate change,” he told Guardian Australia.

“It’s evidence that climate change is already happening â€“ and increasing the risks of hot extremes.”

Blair Trewin from the Bureau of Meteorology said: “April won’t be a record but it will be well above normal.”

Throughout May temperatures across most of the country have an 80% chance of being warmer than the average from 1961 to 1990. By June and July most coastal regions will continue to have unusually warm weather, however temperatures will return to normal around central and southern Australia.

The current spike in warm weather is happening partly because of the monster El NiÃ±o that spread a pulse of warm water across the Pacific Ocean in 2015. That El NiÃ±o is dissipating, spreading the warmer water around Australia, raising temperatures.

But all that was happening on top of the background of global warming, Trewin said. He said that these days, in an El NiÃ±o year, the world tended to experience extreme temperatures and merely “above average” temperatures in other years. Only when a La NiÃ±a cooled the globe were there normal or slightly cool temperatures.

Now can someone answer this –

Now in between those warming periods temperature was basically flat or falling.

So no statistical difference between the rates of rise or fall but Co2 is climbing throughout.

We know it’s been warming since the end of the LIA around 1850 and according to climate scientist James Hansen 120000 years ago it was warmer with sea level 6 – 9 metres higher yet Co2 levels were around 100ppm less.

Question – The correlation between Co2 and temperature is what??

PS.The Co2 measurements come from Law Dome and Mauna Loa and the warming temperature rate is from Professor Phil Jones a climate scientist whose compilation of historic global temperature data from the late 1800s to the present is a key element of the IPCC’s reports.

The cooling is as attested to in Science News vol. 107 March 1975 by John H Douglas –  Having risen about 1.1 degrees C. between 1885 and 1940, the temperature has already fallen back some 0.6 degrees, and shows no signs of reversal. This question has led many scientists to call for new emphasis on the study of climate and for planning ahead to meet any eventuality. Typical of these expressions of concern is the recent National Academy of Sciences report on global climate change (SN:1/25/75,p. 52), with its pleas for immediate action. According to the academy report on climate, we may be approaching the end of a major interglacial cycle, with the approach of a full-blown 10,000-year ice age, a real possibility. Again, this transition would involve only a small change of global temperature-2 or 3 degrees but the impact on civilization would be catastrophic…….( Sound familiar.)

An international team of 32 authors from 24 institutions in eight countries has published 25 April 2016 a study titled “Greening of the Earth and its Drivers” in the journal Nature Climate Change.
Part of abstract –  Here we use three long-term satellite leaf area index (LAI) records and ten global ecosystem models to investigate four key drivers of LAI trends during 1982–2009. We show a persistent and widespread increase of growing season integrated LAI (greening) over 25% to 50% of the global vegetated area, whereas less than 4% of the globe shows decreasing LAI (browning). Factorial simulations with multiple global ecosystem models suggest that CO2 fertilization effects explain 70% of the observed greening trend, followed by nitrogen deposition (9%), climate change (8%) and land cover change (LCC) (4%). CO2 fertilization effects explain most of the greening trends in the tropics, whereas climate change resulted in greening of the high latitudes and the Tibetan Plateau. LCC contributed most to the regional greening observed in southeast China and the eastern United States.

“The greening over the past 33 years reported in this study is equivalent to adding a green continent about two-times the size of mainland USA (18 million km2), and has the ability to fundamentally change the cycling of water and carbon in the climate system,” says lead author Dr. Zaichun Zhu……and according to the clmate zealots this is somehow bad!