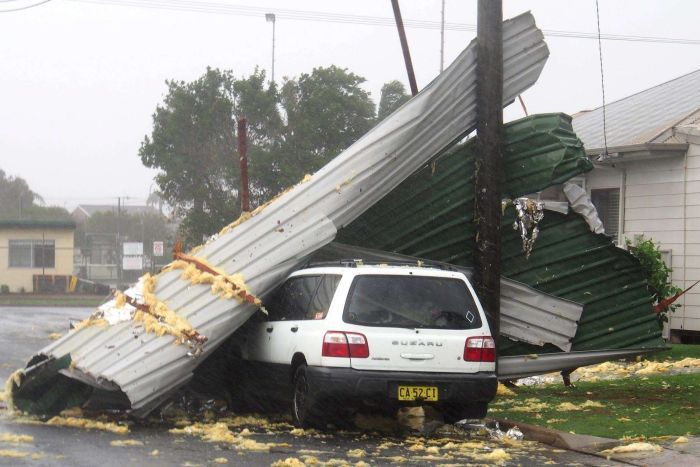 Three people have been killed in wild weather in NSW’s Central Hunter region, where homes have been washed off their footings in the town of Dungog, north of Newcastle.

Emergency crews have been battling “cyclonic” conditions, which have already brought heavy rain and wind gusts in excess of 135 kilometres per hour.

“Numerous calls were received by emergency services for assistance, particularly in the Stroud and Dungog areas,” a NSW Police statement said.

“During the morning a woman and two men were located deceased within the Dungog township.

“The circumstances surrounding their deaths are still to be determined.”

A school bus had been washed off a road near Maitland, and several Hunter homes were split in half by falling trees.

Tens of thousands of people are without power and SES crews have answered more than 4,500 emergency calls as wild weather associated with a low off the east coast batters Sydney, the Hunter and the NSW Central Coast.

The Bureau of Meteorology reported 119 millimetres of rainfall in the 24 hours until 9:00am at the Sydney Observatory Hill – the wettest 24-hour period since 2002.

The SES says “unprecedented” wind gusts of up to 135kph have lashed the Hunter, with dozens of houses losing their roofs, thousands of trees down, and more than 200,000 properties without power across the state – the largest outage since 2007.

Dozens of people have been rescued after being trapped in buildings, on roofs and in cars.

Now forecasters have warned that another low pressure system is forming off the Central Coast and is expected to move into the Hunter and coastal areas this afternoon.

A severe weather warning is in place for locally destructive winds, heavy rainfall and damaging surf in the Sydney Metropolitan, Hunter and Illawarra districts.

“We’ve received just under 3,000 calls for assistance [in the Sydney, the Hunter district, Central Coast and Illawarra] within a 24-hour period, which is enormous.

“We’ve haven’t seen this sort of weather pattern, this east coast low, or one as severe as this, in years.

“The consistent gale force winds … are actually cyclonic in some areas with gusts up to 135 kilometres per hour.”

SES crews had to carry out a number of swift-water rescues after floodwaters swept through the Stroud campground in the Hunter.

Councillor Karen Hutchinson described the area around the council-owned site as a disaster zone.

“The front fences are gone, the fence around the pool is gone,” she said. “There are buildings destroyed; the grandstand has been blown out at one end. [There] is huge damage.”

Anthony O’Brien from Ausgrid said the number of properties affected by power outages was continuing to grow.

“As we sit here I can see the system updating and more reports of power lines being brought down,” he said.

Ausgrid crews were battling to repair the damaged network but it is expected that some households’ electricity may not be restored until Wednesday.

Superintendent Wayne Phillips from NSW Fire and Rescue said coastal areas were bearing the brunt of the storm.

It’s been a wild and wet night at Coogee pic.twitter.com/eKGe4wSwp7

“The areas most affected are from Sydney to Newcastle. We’ve got numerous wires down, trees down,” he said.

The Hunter and Mid North Coast are expected to suffer through the worst of today’s wild weather, with about 200 millimetres of rain and gale force winds of up to 100 kilometres per hour forecast.

Meanwhile, there were reports of an 11-metre wave off Sydney.

A number of major roads and rail lines have been closed in Sydney and around the state as a result of the wild weather.

The Princes Highway is closed at Sydenham because of a fallen power pole, the Bells Line of Road is closed at Kurrajong and flooding has closed the Wakehurst Parkway and Oxford Falls Road near Sydney’s northern beaches.

Train services have been cancelled between Newcastle and Sydney as well as between the Central Coast and Newcastle.

Services on the South Coast train line have also been cancelled between Oak Flats and Kiama.

Brett Moore from the Transport Management Centre said the best approach may be to stay home today.

“If you can be home today, it may be a good option as the incoming weather has affected the roads and the public transport network,” he said.

“If you don’t need to be out on the road, probably best not to be.”

Transport NSW cancelled the Manly Fast Ferry service due to the weather conditions and heavy swell.

Courts are closed in Newcastle, East Maitland, Singleton and Wyong due to the wild weather, NSW Justice said.