Australia: Damage in Brisbane after more than 100mm of rain and a ‘Mini tornado’ 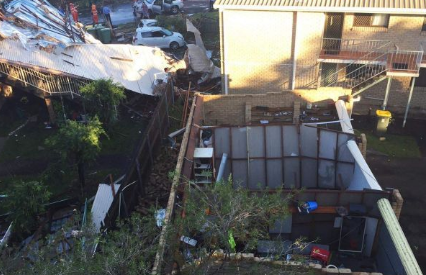 Storms have brought heavy downpours and caused flash flooding across Brisbane, and winds described as a “mini tornado” have torn roofs from properties on the Sunshine Coast.

Andrew Ryan from the Sunshine Coast Local Disaster Management Group said seven people were evacuated from their homes in Mooloolaba.

“We got reports that there’d been some units damaged and reports seemed to be coming in that about five units have lost roofs and a number of people were displaced,” he said.

“One of my colleagues says it felt like a little mini tornado had gone through and sure enough it seems like that’s what’s sprung up.”

“Places like Alderley, Toowong, Corinda that is the zone where you were getting 150 to 180 millimetres,” she said.

Falls of 141mm were recorded at the Bureau of Meteorology’s Archerfield rain gauge in Brisbane’s south, with 110 millimetres recorded in central Brisbane.

Flash flooding affected dozens of cars and properties at Windsor in Brisbane’s north.

“It is beyond me that people still enter water. Some of our vehicles had to park across the road to stop more people from driving into where they had just rescued someone,” he said.

“Plenty of scared people and small babies. We did have one rescue where there was three people sitting on the roof of their vehicle that we went into rescue them with our boats.”

But one couple at Wooloowin in northern Brisbane told the ABC they did not see the water on the road until it was too late.

“We didn’t see that it was flooded and then we came in and then we couldn’t turn the car back on,” a woman said.

Windsor resident Sean Powyer said the speed of the rising water shocked everyone.

“The rain stopped around seven o’clock, the water just seemed to appear out of nowhere,” Mr Powyer said

“That’s when we discovered it and I think at the same time as most other people on the street no one really had a chance to move anything a few cars along the street have been completely flooded.

“I imagine if it had of been a bit slower people would have had a bit more time to move stuff.”

Alex Cambridge said water rose within 20 minutes at his house, his gates flew open and water started pouring into the house.

“It just was pumping into our house, we couldn’t stop it,” he said.

“I know it’s a flood area, but it wasn’t anywhere near this bad when we had those ones (storms).”

The SES said it received around 300 calls for help, mostly for flash flooding.

The storm took out power lines and cut electricity to more than 9,000 customers across south-east Queensland.

Rain a welcome relief to graziers in outback

The weekend downpour was good news for graziers in western Queensland.

More than 100mm fell across parts of the central west.

There was 120mm of rain recorded across the weekend at Eltham Station, west of Isisford, while further west 63mm fell at Goodwood Station, near Boulia.

In the state’s south-west, almost 100mm of rain was recorded at Charleville on Saturday and Sunday.