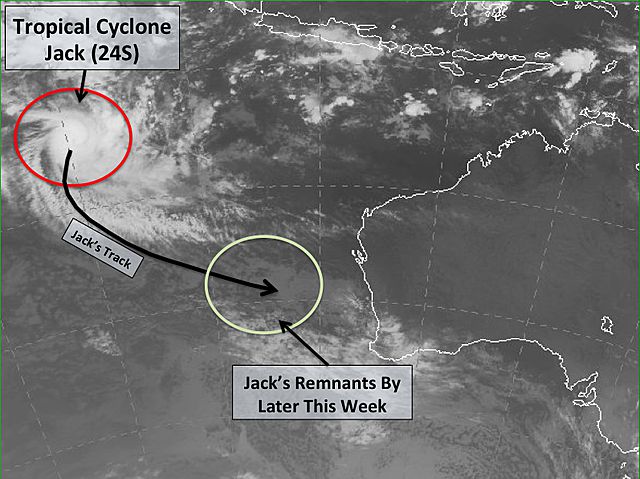 Tropical Cyclone Jack has rapidly developed over the warm waters of the Indian Ocean in the past 24 hours, making it the 10th system to be named this season.

Early this morning, a tropical low pressure system swiftly deepened just within the Australian region (90 degrees East) to form Tropical Cyclone Jack. The warm 28+ degree sea surface temperatures aided in the intensification of this system as its central pressure dropped to 992 hPa and wind speeds accelerated to 120 km/h.

This system is currently located well offshore, more than 2500 km from the western most part of the continent, however it is expected to further intensify over the remainder of the weekend.

Jack is not likely to directly impact Western Australia, however as it dissipates into a deep low pressure trough some rain may be carried over southern parts of WA towards the end of the week.

The Australian tropical cyclone season runs through until the end of April, so Jack may well be the last system that we see. In the past however, cyclones have developed outside this time frame so another system cannot be ruled out.

Note that this Weatherzone story was already 2 days old when republished here.

For the record, Tropical Cyclone Jack reached TC status early on Saturday morning and Category 2 later that day. It has been a severe Category 3 TC since early Sunday morning, although it’s expected to weaken rapidly today (Tuesday).