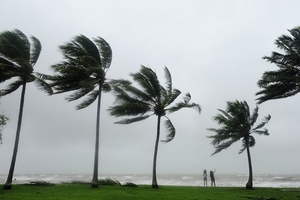 Cyclone Ita will menace the Queensland coast for at least another day.

It is expected to remain a category one cyclone until late on Monday as it weaves on and off the coast south to central Queensland.

Since pummelling into land north of Cooktown as a category four storm on Friday night, Ita has travelled about 1000 kilometres.

Power and communication blackouts and water shortages have been left in its wake.

Premier Campbell Newman predicts it will take about eight to 12 weeks to “really crack the back of the recovery task”.

“It’s good that there is no loss of life but I can’t stress enough (that) people have got to sit tight,” he said during a tour of Hope Vale and Cooktown on Sunday.

The water supply in Cooktown is critically low and will run out by Sunday evening if locals ignore strict restrictions.

Police are patrolling the isolated town and anyone caught using a hose will be fined.

“We’re hoping once we get the power to the treatment plant we’ll be able to resupply water by tonight if everything goes well,” Cook Shire Council CEO Stephen Wilson told AAP.

Proserpine is the next regional town in Ita’s path.

At midnight, it is due to hit Mackay.

Gusts up to 110km/h, abnormally high tides and large waves are expected, the Bureau of Meteorology warns.

But possibly the biggest worry is torrential rain and flash flooding, with isolated falls up to 400mm possible.

Thankfully, once the cyclone passes each community, the rain is tending to clear quickly.

“There’s not much on the north of the cyclone,” senior forecaster Pradeep Singh told AAP.

“The rain should ease as the system moves away off the coast late on Tuesday, and we’ll be left with coastal showers.”

The town is cut in two by a swollen creek and the Bruce Highway remain closed to its south.

Mayor Rodger Bow warned locals there is raw sewerage in the water and people risk disease if they venture out.

“We had severe rain, about 300mm, and I don’t know what kilometre an hour winds, but we have trees blown down,” Cr Bow said.

Townsville Mayor Jenny Hill said there had been two swift water rescues in her city, and some 7000 homes are without power.

While the winds felled some trees, there was no significant damage to property.

“It’s what the locals here call a baby blow,” she said, adding that Townsville was built to sustain cyclonic conditions.