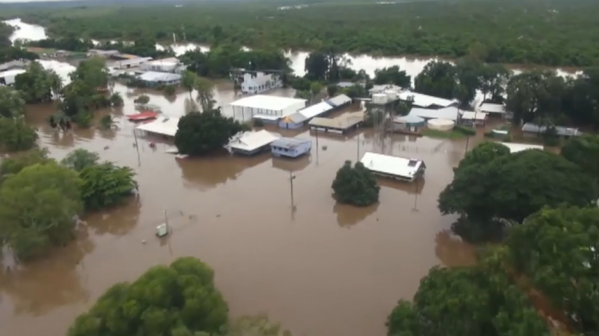 Floods in Australia’s Northern Territory have forced hundreds to evacuate, closed roads and there are reports of crocodiles moving in to the towns.

One woman is so far reported as dead and one man still missing in floodwaters, and 500 people from the community of Daly River have been evacuated to Darwin, with 390 currently being housed at the showgrounds.

Residents of the remote Nauiyu community reported saltwater crocodiles had made their way into town in the floodwaters. The crocodiles were seen on the local football field and the NT News reported one had been seen taking two dogs.

The Daly River is still above major flood levels at 14.68m, and is expected to remain so for several more days.

The water at Dorisvale Crossing near Pine Creek has reached 23.3m, which Commissioner Kershaw said was expected to drop over coming days – which may alleviate pressure on the Daly River – but until then roads into the community will be closed so police can secure pets, homes and valuables.

Police are still searching by air and land for a 28-year-old man from Peppimenarti, whose friends saw him swept away in floodwaters on Christmas Day.

“We do hold grave concerns but we remain ever hopeful that we’ll find him safe and well, and that’s why we’ll continue to search,” Commissioner Kershaw said.

Near Beswick, 100km south of Katherine, a woman aged in her 50s drowned on Sunday when she was unable to escape the car she was travelling in with four others when it got stuck near a creek crossing.

Emergency services have since airlifted several other groups of people across the top end to safety, and Commissioner Kershaw said it was frustrating that Territorians didn’t appear to be heeding flood warnings.

“People underestimate, we see it all the time … you’re better off not trying to cross fast-flowing water because you can’t beat mother nature,” he said.

“Conditions are still very dangerous out there, and as we’ve sadly seen, it’s important that people behave responsibly and do not enter floodwaters in vehicles or on foot.”

More than 600ml of rain has fallen over the past few days and the Victoria, Daly and Roper Rivers are under 24-hour watch.

“That’s a paramount consideration: not to play in floodwaters, not to enter the waters where not necessary, and just to be crocwise,” he said.

“We are in the Territory, and unfortunately that’s just another risk we face.”

Authorities say it will likely be several days before residents can return home and salvage what remains.