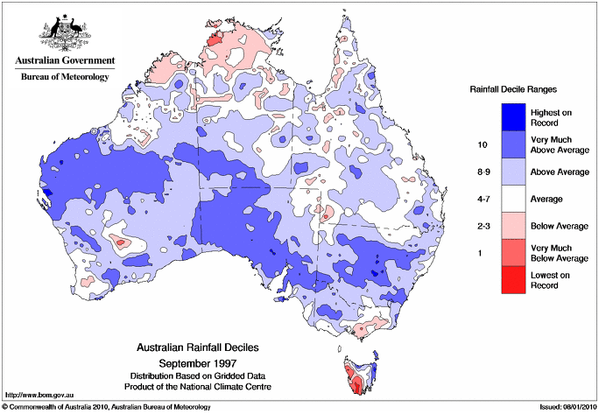 Heavy rain has ruined some grain crops and held up harvests in parts of South Australia, Victoria, NSW and Queensland.

The Bureau’s manager of climate prediction, Dr Andrew Watkins says it’s not unusual to get big rain events during an El Nino year.

Even the strongest El Nino on record was mitigated for some regions by a major rain event.

“Go back to the strong El Nino 1997-98 and we actually had some pretty good rainfall in September which saved a lot of crops and actually made it so we had fairly benign impacts in many areas despite having quite a dry winter,” Dr Watkins said.

“So yes, [a big rain event] can happen during El Nino, it would usually happen during spring. It’s probably happened a lot later than we would might have hoped [this year], but still it’s not really that unusual.

“Overall, we’re still looking at a reasonably dry winter and spring period in most of the cropping areas.

The Bureau says the current El Nino is comparable to the strongest events on record, in 1982-83 and 1997-98. At this stage, the BoM is still projecting this El Nino to remain strong to the end of the year.

“As to whether it will ultimately reach the levels we saw in those other events, it might slow down a bit Ã¢?? my personal feeling is that it will fall a bit short,” Dr Watkins said.

“But it doesn’t really matter: it’s a significant event, in the top three that we’ve ever experienced in terms of how warm the Pacific Ocean is, and will be talked about for quite some time internationally.”

Draw a line under El Nino in the first quarter of 2016: Bureau

In better news for drought-hit farmers, Dr Watkins said a return to neutral weather conditions is the most likely scenario after El Nino breaks down around the New Year.

Dr Watkins said the drying weather system tends to start breaking down around December, and is most commonly followed by neutral weather conditions Ã¢?? about 60 per cent of the time. There’s about a 40 per cent chance of the Pacific flipping straight into a wet La Nina pattern.

But two El Nino events back to back are very uncommon, according to the Bureau.

“We’re not too far off the peak of El Nino [now]; we also know that the Indian Ocean dipole will break down around November, early December, so that extra drying influence will start to ease,” Dr Watkins said.

“What we don’t know, is what’s going to happen with that really warm Indian Ocean. It’s the warmest we’ve ever seen, so it’s hard to compare it to anything.

“My message to farmers would be draw a line under this event come first quarter of next year and then the most likely scenario is for average rainfall to possibly above average rainfall.

“The least likely is going back into another El Nino and strong dry conditions.”

It is good that the grain which is not suitable for harvesting is being cut and used for stock food.