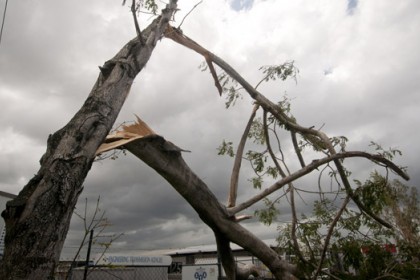 Brisbane city and much of south-east Queensland have been hit by rolling thunderstorms that brought heavy rain, lightning and blackouts to thousands of homes and businesses.

The Bureau of Meteorology (BoM) issued a severe thunderstorm warning on for the region for heavy rain, dangerous winds and large hail.

Rain continued falling into Thursday night, but by 8:10pm (AEST) the BoM cancelled its warning, saying the storms were no longer severe.

The Gold Coast, Sunshine Coast and parts of the Gympie region experienced heavy rain and there were reports of localised flooding at Oakey, north-west of Toowoomba.

Senior forecaster Jonte Hall said a cluster of storms stretched from Brisbane to the Sunshine Coast hinterland and further north.

“There are storms still continuing right up into the tropics,” he said.

“A roof off in Stanthorpe and reports of large hail at Texas [on the Queensland border] as well.”

About 100mm of rain was recorded near Ballandean and Stanthorpe.

The storms also left many without power, but supply was being gradually restored on Thursday night.

“Overall we have had around 17,000 homes and businesses that have been impacted by these pretty strong winds some lightning and heavy heavy rain,” he said.

“Crews are getting out there to get that back on so we have been able to get some of it restored this afternoon, but some pretty difficult conditions with that heavy rain to be working in.”

By 8:00pm, Energex said 384 Brisbane homes and businesses were still blacked out, 1,010 properties were without power in Gympie, with 581 blacked out on the Sunshine Coast and another 515 properties affected in Moreton Bay.

Late on Thursday afternoon, Ergon Energy said about 2,600 properties at Oakey were without power.

There were about 5,300 properties without power in parts of Toowoomba and outlying areas.

About 2,500 lightning strikes had been recorded in the Toowoomba region.

Airservices Australia said storms around Brisbane would cause some disruptions to flights on Thursday night.

The storms had also caused minor delays on across all rail lines into and out of Brisbane.

Queensland police have reminded Brisbane residents to sign up to the Brisbane City Council’s .

Heavy rain was also expected tomorrow, with the BoM forecasting more than 100mm in Brisbane and 140mm on the Sunshine Coast.

Rainfall totals of 50-100 mm are possible, with locally higher totals likely with storms.

The BoM has issued a flood watch for parts of the Central Highlands and Coalfields, Capricornia, and Wide Bay and Burnett districts.

The latest warning comes as the Insurance Council of Australia announced the estimated insurance loss from Brisbane’s super cell storm two weeks ago has .