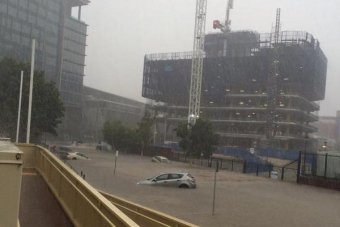 Major train stations in Brisbane’s inner city were closed, forcing delays across the rail network as far as the Gold Coast.

At one point nearly 15,000 Energex customers were without power in the Brisbane, Ipswich and Redlands areas.

Earlier, flash flooding in the Brisbane CBD and surrounding suburbs left cars floating in streets and water cascading down stairs and across footpaths.

In West End, a house caught fire when it was struck by lightning.

An emergency services spokesman said swift-water rescues were launched in Salisbury and Rocklea.

The Salisbury incident involved two cars floating down the street, while in Rocklea three vehicles were stuck in floodwater in an underpass.

Images posted on social media show cars being swept away in Bowen Hills, in inner Brisbane.

Significant delays were being experienced across the rail network, and as far away as the Gold Coast, prompting Queensland Rail (QR) to urge its customers to seek alternative transport.

QR said a direct lightning strike at Yeerongpilly caused an overhead power issue that affected the Gold Coast and Beenleigh lines, while a fallen tree at Banyo affected the Shorncliffe line.

A roof had blown onto the tracks at Nundah and caused overhead power lines to come down there.

“Customers across the network can expect long delays this afternoon due to work to return services to normal,” a QR spokeswoman said.

Trains had resumed running through the CBD by 9:30pm, but there were major delays reported on all lines.

City infrastructure struggled to cope with the intense downpour, with grates across Brisbane seen overflowing with water.

Police reported powerlines down over roads in the northern Brisbane suburbs of Nundah and Northgate.

Across Brisbane and Ipswich, the worst-hit areas were Redbank Plains, Inala, Forest Lakes and Springfield Lakes.

“It pounded the Goodna and Redbank Plains area,” he said.

“There are some trees down through houses at Redbank Plains there are trees down across roads in the Goodna area so the eastern suburbs of Ipswich got a real thumping.”

“I left work, which is the University of Queensland, just after 5:00pm and then I stayed for an hour and a half about 100 metres away along Sir Fred Schonell Drive,” she said.

“There was no movement, and then a few cars turned around and so that allowed us to inch a bit and I went cross country.

“It took me two hours to drive eight or nine kilometres – at that time of day it usually takes about 12 minutes.”

Senior weather forecaster Rick Threlfall said the storms had moved out to sea, after dumping more rain in one hour than had been seen in many months in the south-east.

“The heaviest rainfall was 100 millimetres at Inala down toward the south-west of Brisbane – most of that falling in about an hour,” he said.

“To the northeast of Brisbane, Geebung picked up 95mm but all the way through the city most places seeing around the half 50 to 80mm mark.”

Another storm on the way: weather bureau

He said another less severe storm was expected later on Wednesday night.

At Salisbury, two cars were floating down the street, while in Rocklea three vehicles were stuck in floodwater in an underpass.

“Water is just under the windows and we are still en route to that one,” the spokesman said.

It is understood flood rescues also occurred in Bowen Hills and Acacia Ridge.

North of Brisbane, rainfall brought relief to firefighters who had been battling a bushfire at Somerset Dam Village and another grass fire burning near Mount Esk.

All crews have been stood down as rain drastically reduced the fire threat.