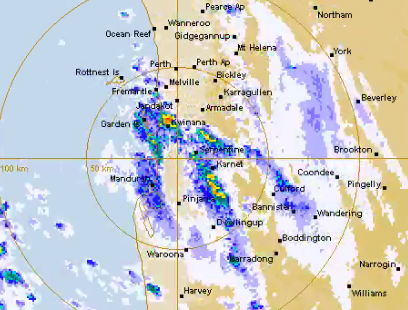 A wild storm that battered Perth and southwest WA had left more than 60,000 customers without power tonight and the weather bureau is warning there is more to come.

Flooded roads caused traffic chaos across Perth while fallen trees have damaged homes and dozens of powerlines have been knocked down.

Wind gusts of above 100km/h were recorded, with 111km/h at Gooseberry Hill in Perth the highest.

The most rain was in the southwest, including 57mm at Witchcliffe.

Winds that strong usually only occurred in the region about five times a year but it would happen twice in three days, said Bureau of Meteorology duty forecaster Meaghan Johnston.

And just a little more of what happened today on my walk in South Perth #PerthStorm #perthnews pic.twitter.com/EqSw1Wurk2

Another strong cold front is forecast for Monday and Tuesday after a temporary lull on Sunday.

There was still strong rain around Perth on Saturday and thunderstorms, higher than normal tides and wild surf conditions further south but the weather was moving east.

Heaviest rain to 9am in Perth area was 40.6mm at Mundaring (Perth 36.4mm). Fast moving showers still moving through pic.twitter.com/d3VmE3WZJL

Western Power crews were working as safely and quickly as possible to restore power to more than 60,000 customers – 55,000 in Perth – and repair damage to the electricity network across Perth and the southwest, a spokesman said.