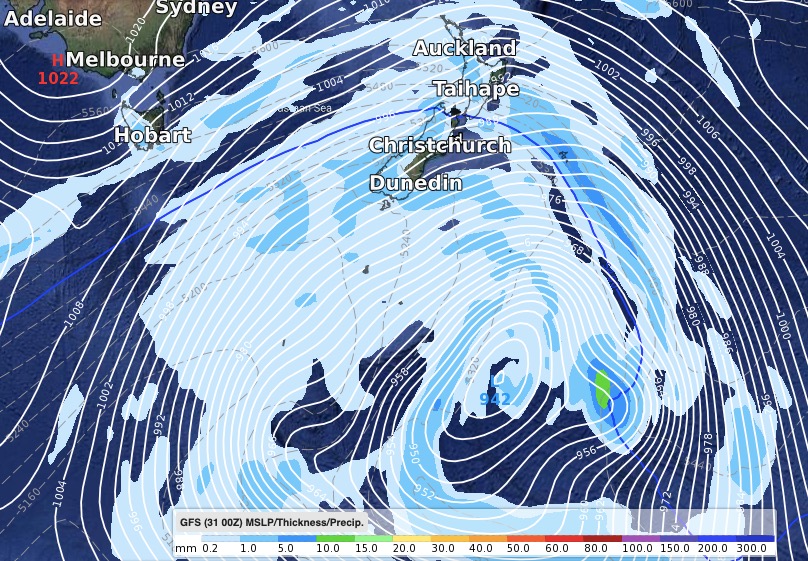 A new month is here and as we enter the second quarter of 2020 the weather pattern over NZ shows no major signs of change other than Autumn is here.

The Autumnal pattern should see more showers, more westerlies and more Southern Ocean storms/lows in the weeks ahead. While lows in the Southern Ocean aren’t the best at fixing droughts at the top of New Zealand they can make for more showery westerlies. Without nights now increasingly longer than our days this reduces evaporation and gives the showers more “shelf life” before falling apart. A positive to focus on.

A tropical cyclone is likely to form this weekend or early next week directly north of New Zealand. Modelling suggests New Caledonia and maybe southern parts of Vanuatu may be at the highest risk of a direct hit. New Zealand looks too far south at this stage but some modelling over the past week has suggested it could help provide more moisture into the NZ area – but don’t bank on it if you need rain. The modelling isn’t sure of where this cyclone is going yet and the narrow shape of northern NZ, be default, gives us a low risk this far out.

The main pattern, when you remove any chance of a cyclone, shows March’s weather pattern continuing on but with an uptick in Southern Ocean lows – creating more windy days over NZ (mainly westerly quarter) and more rain on the West Coast and showers for the North Island.

UPPER NORTH ISLAND DROUGHT ZONES:
For the upper half of the North Island the droughts are easing in some locations but many others are still well down on where they should be. In almost four months some locations have still have less than one single months worth of average rainfall – on top of 2019 being below normal.

More showers are coming and what we are seeing is more slow ‘death by papercuts’ for drought or dry zones. By that we mean no single wet weather event is reversing the big dry, instead it’s showers each week slowly making dents here and there. More of these showers are expected in the next two weeks, perhaps favouring the western side of Northland (which is very dry).

Rainfall totals are expected to be BELOW AVERAGE in Northland, Auckland and Waikato for the next few weeks. Showers look more likely than set-in rain. The cyclone, as we said on Monday, looks more likely to remain north of New Zealand but is still one to monitor.

North Canterbury may be one of the driest areas over the next 10 days with windy weather also causing some evaporation. Northern NZ doesn’t look as windy.

A storm in the Southern Ocean in the second weekend of April (11th and 12th) may be just south of New Zealand and cover a space larger than Australia. It’s Autumn storms like this which will bring warmer, windier, weather to the east of the country and showers into the west. They can also bring colder sou’west changes afterwards.

HIGH PRESSURE:
We still see more high pressure in April pushing in from the west and bringing plenty of dry, settled, days. In fact the middle part of April may well kick off with a big high over New Zealand followed by more showery westerlies and Southern Ocean lows.

North Canterbury may be one of the driest areas over the next 10 to 15 days with windy weather also causing some evaporation. Northern NZ doesn’t look as windy.

TEMPERATURES LOOKING MILD:
One positive is that we don’t see any major nose dive in temperatures. So while leaning dry for some who need rain, it’s also leaning mild which is helpful to many farmers and growers.

March saw snow on the Southern Alps and low down on some properties, we also had inland frosts. The first half of April doesn’t look so cold, in fact regions like Southland will continue to lean several degrees above normal in the days ahead (especially this weekend).

EXTRA APRIL UPDATE:
WeatherWatch.co.nz is aware the drought is bringing prolonged stress to many farmers and growers. We will be issuing a SECOND April outlook later next week. Why a second update? The modelling isn’t as reliable as it has been in recent months – partly due to the chaos Autumn is bringing and partly due to the fact we have an unpredictable cyclone north of New Zealand next week.

On April 9th we’ll issue another update on rainfall and temperature trends for the weeks ahead.

We will also be tracking the cyclone north of NZ in extra updates – the next one being this Friday.

Where the Cyclone might be one week from now (April 8th)