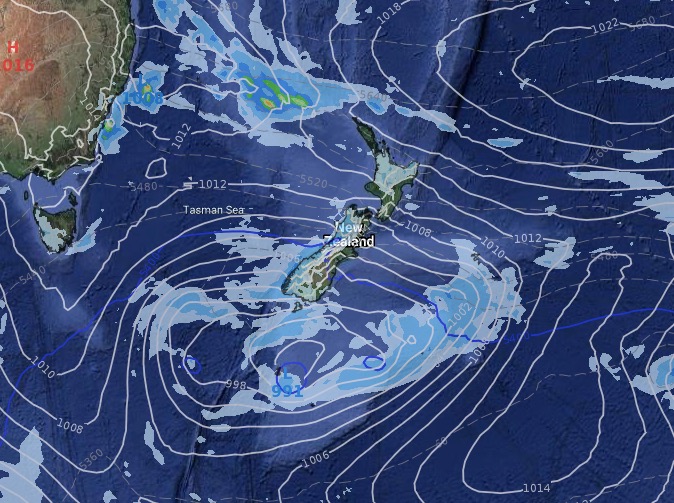 (+8 Maps) — Another large area of low pressure will ‘hug’ the southern coastline of New Zealand this weekend sending another burst of windy westerlies up across parts of the country.

While the low is large in size it is no where near as deep or powerful as the storm earlier this week but it will be producing pockets of severe weather.

WINDY:
Gales will spread as far north as Auckland in exposed areas overnight and into Saturday before easing later on Sunday there.

Further down the country and the windiest weather may be on Sunday itself, with Wellington forecast to have gales then.

The centre of the low isn’t as deep or tightly packed as the storm we had earlier this week, so the further south you go the lighter minds may become. While Dunedin has some gusty weather possible today or Saturday morning the weekend doesn’t look too bad.

TEMPERATURES:
It’s not overly warm in southern regions with highs in coastal Otago and Southland possibly failing to even reach the teens for everyone this weekend.

But the westerly flow this weekend means many regions will be average to warmer than average.

Eastern regions further north look several degrees warmer than normal at times. Hawke’s Bay, for example, has highs in the low to mid 20s this weekend thanks to the westerlies.

Nelson and Marlborough should be in the late teens or even 20 degrees while the upper North Island looks relatively mild with parts of Bay of Plenty also in the low 20s, but with a gusty westerly on Saturday.

Whangarei is likely to be in the low to mid 20s like Hawke’s Bay, but the western side of Northland will be similar to Auckland – a few degrees cooler but still around 20 degrees – and with a mild night tonight.

It’s worth noting that the westerly flow has sub-tropical elements to it for Friday night, meaning a large portion of the North Island will be much warmer than normal tonight, in fact several degrees above normal.

WEST COAST – DANGEROUS SEAS ON SUNDAY MAY CAUSE COASTAL INUNDATION:
Huge swells driven in by these strong westerlies and deep Southern Ocean lows will impact the West Coast on Sunday and coastal inundation is possible.

Wave heights will be up to 6 or 7 metres right along the West Coast, including around Hokitika and Greymouth.

With recent storm surges flooding parts of Wellington’s coastline it’s a timely reminder to be prepared for the worst. The waves and swells this Sunday will be exceptionally large even for this part of New Zealand.