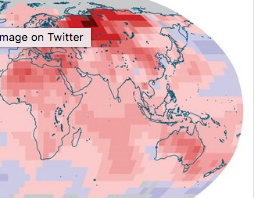 The strongest El NiÃ±o in 35 years, which has seen long droughts, scorching temperatures, water shortages and flooding around the world, is officially over.

But the consequences of a second year of extreme weather will be seen for many more months in food shortages for nearly 100 million people, the loss of income for millions of poor farmers and higher prices in cities, say the UN and leading meteorologists.

According to Australian and US government scientists, sea surface temperatures in the Pacific, which warm significantly every few years, have cooled to normal levels and are unlikely to rise again this year. This marks the end of an 18-month global weather hiatus which has created social and ecological turmoil in Asia, Africa and Latin America.

“There is little chance of [sea surface temperatures] returning to El NiÃ±o levels, in which case mid-May will mark the end of the 2015â€“16 El NiÃ±o,” said an Australian government spokesman.

The current #ElNino is one of the strongest on record increasing hunger worldwide. Watch this video: pic.twitter.com/jEUNwFDNKw

However, scientists say a reverse effect “La NiÃ±a” phenomenon is possible. This would see temperatures fall below normal in the Pacific equatorial waters, bringing heavier rains, floods and much cooler temperatures to many countries.

Overstretched humanitarian groups have warned that the extreme conditions will last for many more months. Concern is mounting in southern Africa, where 50 million people are expected by the UN’s World Food programme to need help with food supplies in the coming nine months.

Some of the most extreme weather has been felt across southern Asia in the last nine months, where countries including India, the Philippines, Myanmar, Thailand, Laos, Cambodia and Indonesia have all experienced their worst droughts and most intense heatwaves in decades.

“Millions of families are living in El NiÃ±o’s devastating path of extreme conditions. Children, especially, face hunger, disease and futures shorn of the opportunities provided by education. Countries most affected by El NiÃ±o are also bearing the brunt of climate change, and it’s the most vulnerable and impoverished communities that will continue to be the hardest hit,” said Tanya Steele, interim CEO of Save the Children.

Weekly Nino 3.4 SST anomaly has dropped below zero for first time since week of 7/30/2014. #ElNino likely at its end pic.twitter.com/OMEWXUx2dv

Two consecutive failed monsoons, the lowest rainfall in seven years, and some of the hottest days and nights ever recorded in India saw vast tracts of farmland scorched and rice, maize, sugar cane and oilseed crops badly damaged in 2015/16.

Hundreds of millions of Indians who depend on farming for livelihoods were badly affected, with reports suggesting thousands of poor farmers have abandoned their withered crops and gone to live in towns.

May and June are usually India’s hottest months and temperatures regularly exceed 40C in the run-up to the monsoon rains. But the severity of this year’s heat has been been unprecedented. Rivers, lakes and dams have dried up in many parts of Rajasthan, Maharashtra and Gujarat states.

Vietnam has suffered its worst drought in nearly 100 years with record low river flows and salinisation of fresh water supplies. Because of low water in the Mekong river and its tributaries, saltwater intrusion started two months earlier than usual and reached 20km to 30km further inland than normal.

As a result, more than 429,500 hectares of crops were damaged, severely hitting rice production. According to the UN, 500,000 hectares (1.2m acres) of rice paddy are still under threat and 300,000 households have had no income for many months.

More than 10,000 households in 11 provinces have had to be supplied with bottled water, and water purification tablets. Rain has reportedly returned to Vietnam’s parched coffee belt but around 20% of all coffee trees have either been killed or damaged.

This winter, Mongolia suffered a particularly severe dzud, or winter of snow, blizzards and temperatures as low as minus 50Â°C. It has been a disaster for tens of thousand of herder families who have lost around 40% of their herds and seen more than 1 million livestock die, primarily due to starvation or from the cold itself. More than 2.5 million cattle are expected to die by the end of the year. The knock-on effects are seen in children’s education, unemployment and financial losses.

Nearly 250,000 hectares (617,763 acres) of unique flooded forest around the ecologically vital Tonle Sap lake have been devastated by fire since January. The lake is the most important breeding ground for many species of fish which migrate into the Mekong river and provide thousands of Laotian, Cambodian and Vietnamese communities with food.

According to ChhÃ©ng PhÃ©n, the director of the Ministry of Agriculture’s Inland Fisheries Institute (IFReDI), the fires will reduce fish production next year. Fish forms 80% of the protein in Cambodians’ diet.

The exceptionally severe drought has also left tens of thousands of farmers unable to plant rice crops. Annual rains have come late, exacerbating the drought, and exports of Asia’s staple food are expected to be the lowest in many years. Although water has been brought in to help farmers plant, the rice industry now fears that the arrival of La NiÃ±a will bring devastating floods.

Some 2.5 million farmers people were affected by the dry spell, which also led to the deaths of cattle, monkeys and tonnes of fish, said the National Center for Disaster Management (NCDM).

Monsoon rains are expected to start within days but it may take months before the full effects of the deepest drought and highest temperatures in living memory are over. Water shortages are common in April and May but this year more than 2,000 villages have been left desperate for drinking water, with dried up wells, ponds and rivers. Inle, the country’s second largest lake, suffered from unprecedented low water levels and farmers have been unable to plant crops. The Magway, Mandalay and lower Sagaing regions, known as the “dry zone”, have been especially hard hit.

The Philippines depends on rice imports from Vietnam and Thailand, but prices are expected to rise dramatically as both these countries have been hit hard by droughts and crop losses. In a country where rice accounts for about nearly a quarter of all poor people’s spending, any price increases or shortages can translate into political dissent. Farmers have warned of more crop damage later in the year when La NiÃ±a, the counterpart of El NiÃ±o, could develop and bring intense rains.

More than 5 million people, many on the island of Mindanao, have been severely affected by drought and heatwaves. Nearly 200,000 farmers are said by government to have lost crops.

Indonesia has seen failed harvests, increased hunger, and severe floods and landslides. The El NiÃ±o conditions peaked in January and coincided with the main growing season for maize and the planting season for rain-fed paddy rice. Heavy rains have now started, resulting in widespread flooding and landslides that have caused many deaths.

Latest estimates suggest nearly 25% of the main rice crop was not planted by the end of December 2015 in eastern Indonesia, Java and Sulawesi. The drought is said by the World Food Programme to have affected about 22 million people who rely on agriculture. More than 1 million are expected to need food aid. Income losses have been reported for 80% of households. The worst effects are expected to be felt after July.

Nearly 500,000 people â€“ half of that figure living in the poor eastern province of Nusa Tenggara Timur (NTT) â€“ are said by the UN to be in need of food, with a further 700,000 at risk of food insecurity. If the late, heavy rains cause flooding, food access could become problematic for the people in the most affected provinces, say humanitarian groups, and crops could be hit by landslides and flooding.

Severe drought delayed crop planting and has significantly reduced yields, and left many communities seriously short of water. According to the Ministry of Agriculture, nearly half the households across the country are likely to experience hunger, with around 120,000 people severely affected.