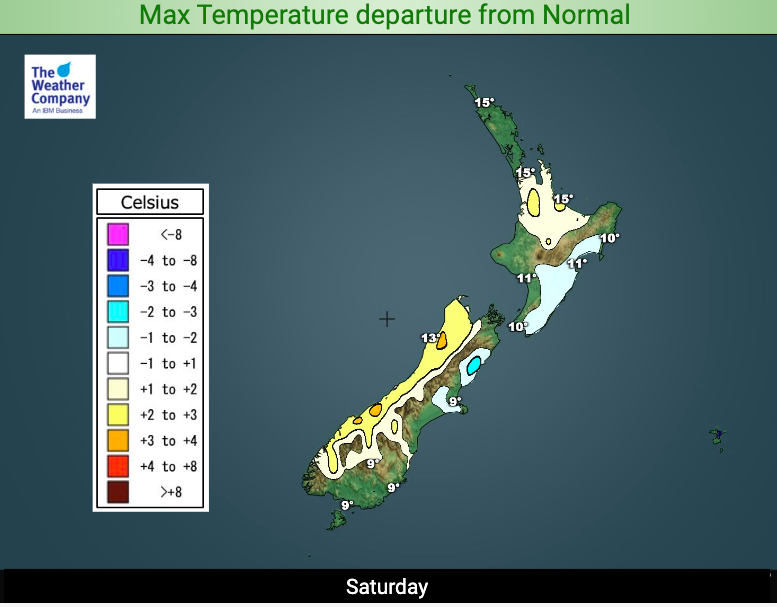 We’re in the depths of winter but you wouldn’t know it. New Zealand has had a week of well above normal temperatures at a time of year that is traditionally the coldest.

Sub-tropical and northerly quarter winds have been consistently affecting the nation since last week and now two incoming “cold” changes look to be falling apart fast as dominant high pressure systems continue to push through – and another sub-tropical low flirting with northern NZ early next week.

“New Zealand can have wintry blasts until October but time is fast running out for set in winter weather with an early spring weather pattern arriving” says WeatherWatch.co.nz head forecaster Philip Duncan. “Winter is about death and decay but spring is about injections of warmth, grass growing faster, new life showing up in the form of buds on trees and lambs in paddocks. The warmer than average weather is helping kick some of this off”.

Mr Duncan says an early spring pattern doesn’t stop snow storms or frosts, but it does increase the number of days that don’t have them. “Right now the southerlies we’re getting are wussy, compared to what NZ can get”. Nine years ago in the middle of August it snowed heavily in downtown Dunedin, downtown Christchurch and downtown Wellington. Snow also fell in parts of Auckland City and the hills of Northland. It was a one in 30+ year event and shows August can turn very wintry.

In saying that, a cooler change is moving in tonight and over Saturday, but despite this southerly change daytime highs will go from being several degrees above normal on Friday to just “average” in most regions on Saturday. Also, one third of NZ will still remain warmer than average and only a few areas in the east will actually drop below normal for this time of the year.

A second cold change next week now looks even less likely due to dominating high pressure. Although those in Southland and Otago should still be monitoring the changeable forecasts. The latest data at www.RuralWeather.co.nz (NZ’s largest weather data website) suggests conditions don’t look too bad in the lower South Island next week.

Yet another sub-tropical low next week – one that is currently through Australia’s interior (which is also a little unusual) – will likely encourage more mild conditions.

The meteorological end to winter is August 31, the astronomical end is September 23. Mother Nature ultimately dictates the start and end of winter and right now it looks as though an early spring is developing.

And a reminder once again – spring is not summer, snow storms and frosts can be more problematic in spring, but weeks of cold weather we had in June and July (especially the South Island) are now being replaced by warmer than normal airflows.

Hey Phil, there’s a chance of a colder southerly later next week as that big high rolls in. It is quite a long way south for this of year…it continues on the pattern we’ve seen in recent months. They can create polar blasts but also kill them off just as quickly.
Cheers
Phil D