Winter Solstice brings frosts, coldest nights of the year so far for some 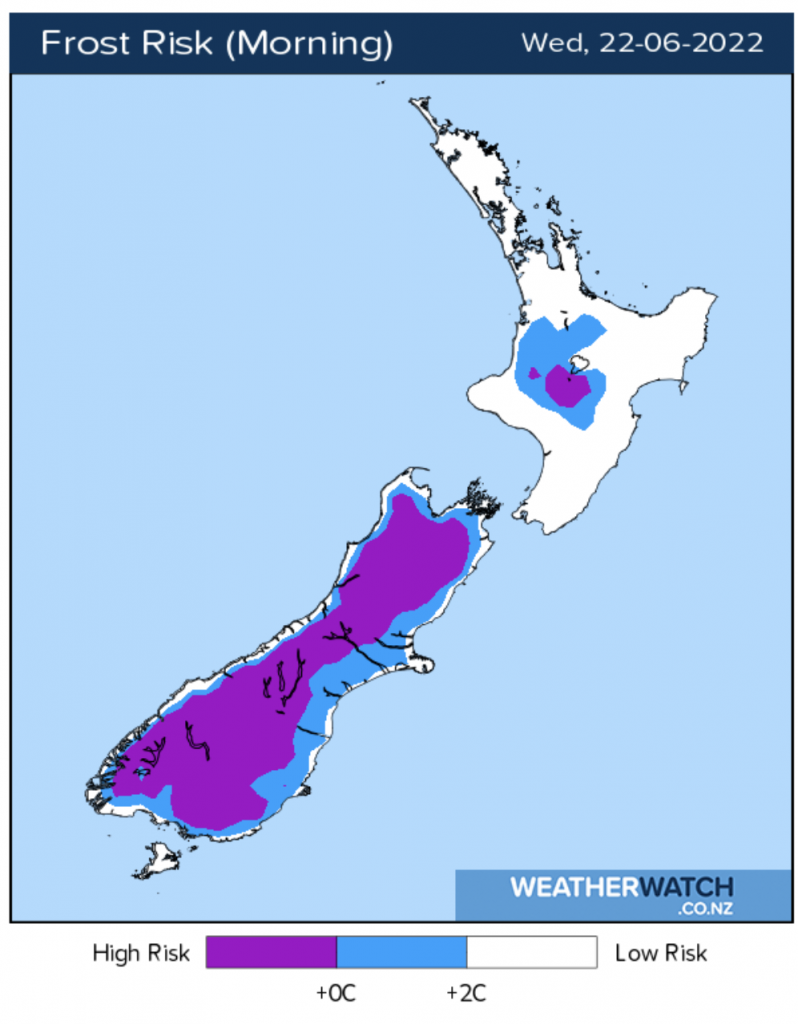 Temperatures this morning were the coldest of the year for parts of the country with even some people reporting their first frost of the year – which is very late in the season. For others the frosts have returned after a long stretch of milder than usual weather.

The shortest day of the year is also historically the beginning of the coldest period of weather for the next six weeks, says WeatherWatch.co.nz. The winter solstice is a precise moment in time – this year that moment is 9:13pm on June 21. With the solstice being so late in the day it means that both June 21 and June 22 are the shortest days of the year.

Tonight colder air moves northwards with frosts expected as far north as Waikato, even potentially around the Bombay Hills (where it’s borderline due to a south east breeze still blowing through).

Hamilton is forecast to drop down to +1C tonight while southern parts of Auckland (like Pukekohe) have an overnight low of +3 (and downtown Auckland drops to +6C). Frosts in Waikato may be a bit patchy.

WeatherWatch.co.nz says frosts will be widespread across inland parts of the South Island tonight as powerful high pressure slowly moves in with clearer skies, lighter winds – and a gentle southerly flow.

Coldest weather will be over the South Island tonight with the Frost Forecaster at RuralWeather.co.nz showing heavy frosts across a number of regions and temperatures inland dropping below -4C.

Heaviest frosts tonight will be through inland parts of the South Island.

Frosty weather is forecast to linger until the end of the week, then a slightly milder north to north west change moves in.

Temperatures this weekend will still be quite cool for many, but perhaps not quite as cold as the next few days and nights ahead.

There was slight rime frost on our deck in Kaikohe this morning: droplets of moisture on the deck rail had hardened into a myriad of frozen circlets. Kaikohe is 300m up, so it lowers the temperature about 3 degrees more than the coastal parts of Northland.