Low down to 962hPa near Fiordland, thunderstorms & squalls line much of western NZ tonight 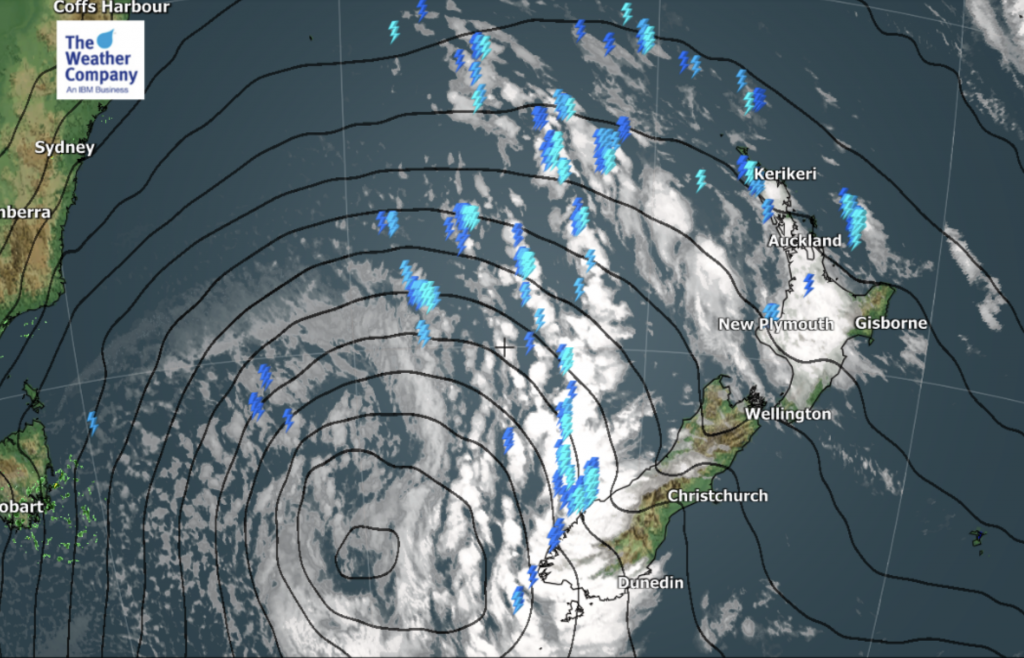 Updated 7:12pm Sunday — A deep low/storm was in the Southern Ocean this weekend but other areas of low pressure have tonight seen the system consolidate into a new centre, parked right near Fiordland.

GFS modelling shows the centre tracking over the lower South Island tonight, while other modelling shows it very close to Fiordland and Stewart Island as it tracks SE back down over the Southern Ocean by Monday/Tuesday. Over the coming 48 hours the low will deepen into a major storm offshore SE from New Zealand, potentially dropping down into the 930hPa range – air pressure similar to that of Category 5 tropical cyclones (although cold centred storms this far south have a very different structure to tropical cyclones).

The main cold front from this low pressure zone is moving into the North Island overnight tonight and across Monday.

This combination of mild and cold air is creating the perfect zone for squalls, hail and thunderstorms along western NZ, mostly focused around central areas (upper half of the South Island, lower half of the North Island). The deep low air pressure is also adding to the instability and means downpours and thunderstorms can rapidly develop – and perhaps vanish again within an hour.

WeatherWatch.co.nz forecast air pressure in the lower South Island today to drop to 967hPa in Bluff, which it hasn’t done for at least a decade and is very low air pressure for NZ. Some weather stations may have now dropped below 965hPa in Southland and Fiordland with the new centre of this big low nearby.

With the large low not really moving from NZ for another day or two the weather is set to be on rinse and repeat until about Tuesday, when a tamer westerly flow moves in for many regions. Before that happens, the coldest pulse of this system will move into eastern and northern parts of NZ tonight and across Monday.

More deep low pressure in the Southern Ocean is expected to drag in wintry weather for parts of the South Island across the coming week while the North Island may feel more like Autumn.