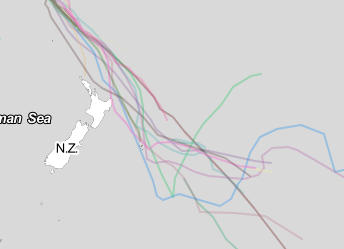 Cyclone Donna’s journey towards New Zealand looks more complicated than Cyclone Cook which is why we’re still taking our timing working out how this might unfold.

It appears the bulk of Donna’s rain and wind will be out at sea – the storm will likely go through a significant weakening process around Wednesday or Thursday as it tracks south over much cooler waters, then turns more south east…where it may strengthen again as a new system.

Later this working week, at the same time that Donna tracks south into the New Zealand area, a weak low and rain band will also be crossing over New Zealand.  There is some confidence the two could link up and create a new low pressure system that deepens off the east coast of New Zealand which could create a new set of weather to focus on.

Sub-tropical rain is the main focus with Donna for New Zealand at this stage, but until we get a better feeling on tracking and energy we can’t rule out other threats like dangerous beach conditions or gales.  Donna will not hit New Zealand as a tropical cyclone, it will be weakening and transitioning into a new system before it gets closer (which can deepen again once it tracks east of NZ). A direct hit looks unlikely based on most modelling, but there is a fair bit of uncertainty with tracking beyond New Caledonia (where Donna will pass within the next couple of days).

On Tuesday morning we’ll provide details on how we think Donna may impact New Zealand covering possible tracking of the centre, rain, wind and swells – plus when it might all clear away. Hopefully the bulk of the severe weather will be out at sea, but it’s a close call so one to continue to closely monitor.

I see Metservice have basically dismissed it but I am not so sure about that.

Very close call & will watch your prognosis with interest

I think we understand what MetService is doing – they are saying it’s not coming to us as “Tropical Cyclone Donna”. But the clouds and rain may still come here….so it’s tricky. They have a tough line to follow as they have to track the “Tropical cyclone” but once it loses that title they technically dont have to cover it in the same way.

WeatherWatch will have more details tomorrow and we’ll stick our neck out and take a punt at what we think may happen.