When will the warmth return? + Snow around Waikato this morning 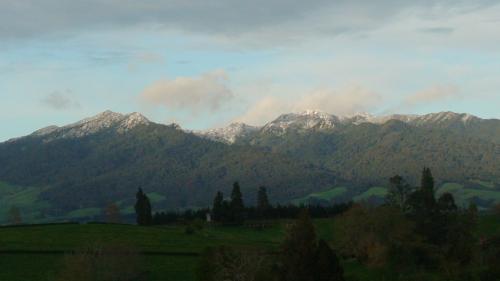 It remains bitterly cold across New Zealand this morning but some regions are on the improve already.  Auckland is up to three degrees warmer than it was at its hottest point yesterday with 12 degrees as of 10am.

Photos have this morning come through showing snow to low levels across Waikato.  WeatherWatch.co.nz estimates snow fell as low as just 500 metres along the Kaimai Ranges – that’s less than twice the height of Sky Tower which is at a similar latitude.

Mt Pirongia near Te Awamutu and Hamilton is clearly snow capped today too – an unusual sight especially for spring.

While it remains zero in Waiouru the snow has stopped falling.

The low responsible for the nasty weather is this morning moving east into the Pacific Ocean and conditions are quickly easing along the North Island’s east coast, although it is still cold with strong southerlies.

The South Island remains settled and quite sunny but bitterly cold with many centres still below 6 degrees this hour.

So when will the warmth return?  WeatherWatch.co.nz predicts centres north of Waikato and Bay of Plenty should see a jump of a few degrees today then most places across New Zealand will see a similar rise tomorrow as a high moves in from the west.

Nights will remain cold for at least two more nights with frosts expected in sheltered places – a definite concern for grape growers at this time of year.

By Thursday winds should shift more northerly bringing temperatures back up to the mid to late teens for most regions.

WeatherWatch.co.nz predicts that on Friday a deep and large area of low pressure will move in from the Tasman Sea bringing humid and mild weather to many places – along with the potential for heavy rain and heavy rain warnings for some parts of northern New Zealand.

The low is likely to bring another few days of unsettled weather across New Zealand.