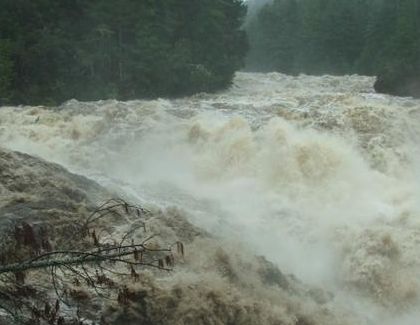 Auckland’s stormy weather will give way to blue skies tomorrow.

But by the end of the week deluges could return if tropical cyclone Wilma continues its course for the upper North Island. It is at present sitting above Tonga.

Tropical cyclones Vania and Zelia, which burned out in the Pacific last week, marked the beginning of a wetter, less settled period of summer weather.

Last week’s sudden shift from hot, dry conditions to monsoon-like rain is a hallmark of the La Nina weather cycle, which brings warmer temperatures and rain to the North Island.

La Nina’s warming of the Pacific Ocean, which was responsible for flooding in Australia and Southeast Asia, is a breeding ground for tropical cyclones.

The cyclone season begins in November and peaks in late January to early February.

Subtropical lows are also common during this period. It was this weather pattern which “lifted” the sea to an unusual height, causing much of the unnaturally high tides yesterday.

WeatherWatch.co.nz’s Philip Duncan says that the centre of a large low pulls the sea upwards “like a large-scale vacuum cleaner”.

In Whitianga the tide was 300mm higher than usual. Parts of Auckland had tides 100mm higher than normal. The king tide combined with heavy rainfall and blustery northeasterlies caused the flooding in coastal areas.

Thanks guys for all the excellent weather info this weekend. There are obviously a lot of other weather watchers out there that like nothing better than a good storm. Can’t say I am looking forward to another dose next weekend though.