Wet for the lower North and east in the South Island 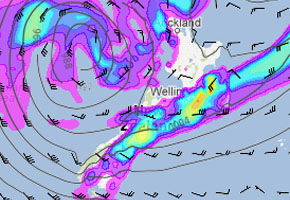 Tomorrow there should actually be a spell of dry weather in the North Island with some sun after any early showers clear in central regions, winds will be light from the north. Showers will develop in the morning about Northland however spreading to Auckland in the afternoon then eastern regions later in the evening or at night.

Showers will hang about Taranaki most of the day becoming a little more persistent in the evening with northeasterlies, rain about Wellington and southern parts of Wairarapa eases during the day to clear in the evening.

It will be wet on the east coast of the South Island with rain heavy at times especially in inland areas i.e. the foothills in Canterbury. Showers about the top of the South Island and in Southland possibly clearing late afternoon, mainly in Southland. Snow flurries to 700m later in the day in Canterbury. The West Coast should remain dry with sunny spells and gusty east to southeasterly winds, perhaps a few showers in northern areas of Buller however.

Wednesday looks wet for the north and east of the North Island but there may be dry spells at first, wet also for the east coast in the South Island, dry in Southland on Wednesday mostly although there may be the odd light shower at times. Dry in Westland.